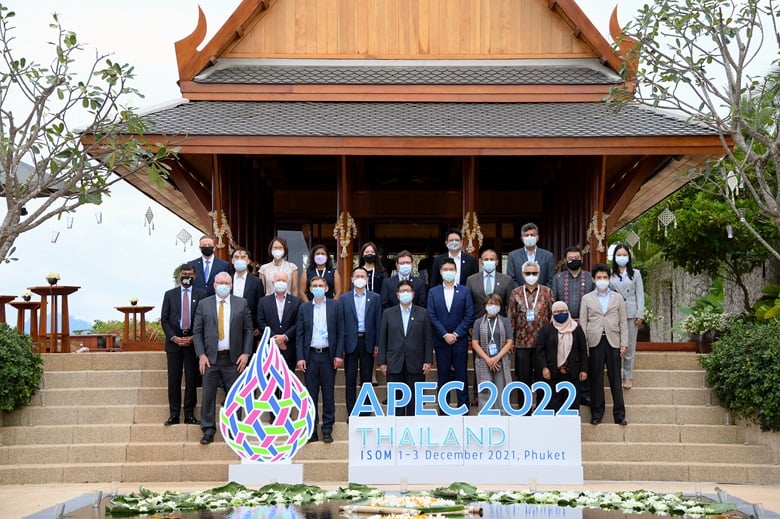 “The pandemic has made us look at other crises in a different light, particularly climate change”

Last week, officials from the 21 members of the Asia-Pacific Economic Cooperation (APEC) met in Phuket for an informal meeting—the first gathering of APEC delegates under the 2022 host, Thailand, and the first physical APEC event since early last year. As chair, Thailand will lead the region’s focus on collaborative economic advancement through digitalisation and innovation, sustainable and inclusive growth, underpinned by effective COVID-19 management.

In the face of a global health crisis that has caused the worst economic downturn in over seven decades, APEC economies have been steered by steady hands throughout this uncertain period. Last year, when the pandemic was declared, APEC quickly pivoted to the now all-too-familiar virtual meeting format, making it possible for economic cooperation—made even more essential by the virus outbreak—to continue.

Coincidentally, that was the year APEC leaders agreed on a new vision, for an “open, dynamic, resilient and peaceful Asia-Pacific community by 2040, for all our people and for future generations”—the Putrajaya Vision 2040.

New Zealand, as chair of APEC in 2021, took the difficult, and somewhat prescient decision, to only host meetings virtually throughout the year.

Despite the limitations the world has faced, this past year saw APEC bounce back on a stronger footing. Leaders decided to build on what we’ve learnt during the pandemic and set out a plan for APEC work through until 2040. The result is the Aotearoa Plan of Action, which aims to advance trade and economic growth in the present, while underpinning inclusive and sustainable policies to support future generations.

Over the course of the year, APEC has demonstrated how trade and cooperation is a force for good. Our members have rejected vaccine nationalism. After its trade ministers met last June, no APEC economy has rolled out export restrictions on vaccines, in fact, many of its members even lowered tariffs on vaccines and many formally locking in digital trade facilitation measures to move them across borders more quickly.

The lessons of the pandemic have made us look at other crises in a different light as well, particularly climate change.

APEC has made progress on sustainability policies, with its members planning to discuss fossil fuel subsidies. Governments have taken further steps this year towards making it easier to trade in goods and services that support lower emissions by, for example, agreeing on a list of environmentally-related services to build on APEC’s existing list of environmental goods.

This past year, APEC’s digital meeting spaces were hospitable and enjoyable. They paved the way for a sustainable, digitally-enabled, and inclusive recovery. This recovery will be seen through by Thailand, as the next chair of APECS.

From a policy perspective, we expect this transition to be seamless, with the two chairs sharing a range of priority themes, such as digital innovation and environmental protection.

Among Thailand’s policy priorities is the reopening of the Asia-Pacific region—a clear sign that we’re beginning to see the beginning of the post-pandemic era in which the region will regain its dynamism. As diplomats and trade negotiators have learnt the hard way, rapport and relationships are lost without the travel, without face-to-face conversations and chance encounters that enrich connections between people from across different borders, and so ultimately, cooperation.

The COVID-19 virus itself will not likely be totally eradicated by the time we’re supposed to meet next year in Pattaya. This much is clear as news of variants of concerns such as B.1.1.529, also known as the Omicron variant, emerge and potentially threaten the reopening of the region.

Thailand will lead the region in navigating a world where COVID-19 has been diminished and we’ll be able to live and even prosper with it. Under Thailand’s leadership, we can expect that APEC will explore new shifting paradigms, shaped by the digital economy, and sustainable and inclusive growth.

Dr Sta Maria is the Executive Director of the APEC Secretariat. This article was originally published by the Bangkok Post.

The Asia-Pacific’s Recovery will be Divided and Fragile

Lessons of the pandemic will inform policy for decades