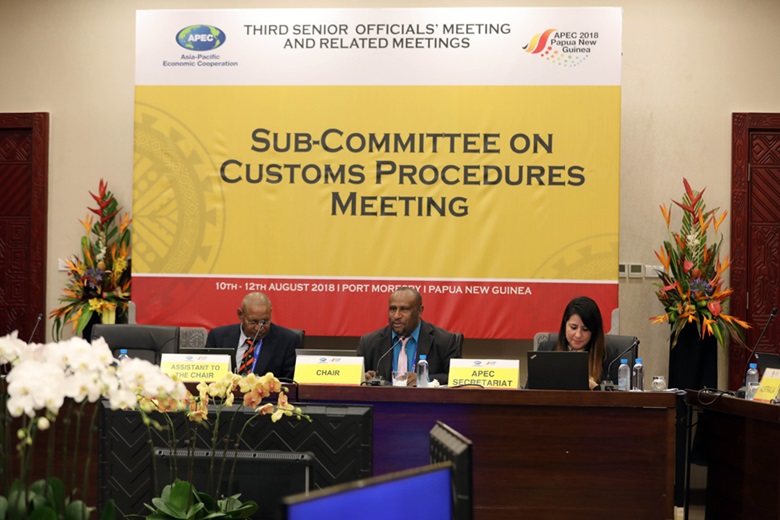 Customs officials from APEC member economies are giving the green light to a digital revolution that could make trade substantially easier, cheaper and more feasible for businesses in the Asia-Pacific.

The focus of their initiative is on aligning one-stop platforms for completing import and export clearance requirements, called “single window” systems, which APEC economies are deploying to facilitate the movement of goods across borders and reduce costly shipping delays.

The findings of a new study on single window interoperability from the APEC Policy Support Unit aim to guide this pioneering push to maximize these systems’ benefits and enable more firms to trade, advanced during customs officials’ meeting over the past week in Port Moresby.

“As customs authorities in APEC economies harness technology to improve data flows between businesses and border control agencies, we are beginning to think about how our approaches can fit together to make cross-border trade more seamless and efficient,” explained James Kombuk Bire, Chair of the APEC Sub-Committee on Customs Procedures.

“Harmonizing customs procedures in the APEC region as they become more automated could make it that much easier and cheaper to ship around the region, and encourage businesses on the small-end of the spectrum to trade in greater numbers,” continued Kombuk Mire, who is also Commissioner of Trade and Corporate Services at Papua New Guinea’s Customs Service.

All 21 APEC member economies have notified acceptance of the World Trade Organization Trade Facilitation Agreement for reducing red-tape and streamlining customs, boosted by collaborative single window system development and capacity building projects in the region. This work has helped to reduce the time it takes to export in APEC economies 16 per cent between 2014 and 2017, from 3 to 2.5 days, and reduce the cost 8 per cent to USD 436 over this same period.

Automating the transfer and processing of shipping information like health, security and financial data via single windows can save as much as USD115 per cargo container, lowering trade costs for businesses of all sizes, the APEC Policy Support Unit reports.

“The simpler it is to satisfy license, permit and fee requirements, the easier it is for an e-retailer in Pittsburgh or local leather goods producer in Papua New Guinea to take advantage of new market opportunities in the digital economy,” said Shiumei Lin, Vice President of Public Affairs, Asia-Pacific at UPS. “APEC continues to lead the way in customs modernization to do just that.”

“Single window system interoperability is still in its infancy in the region,” said Dr Akhmad Bayhaqi, a Senior Analyst at the APEC Policy Support Unit and co-author of the study. “Work in APEC to bridge legal and regulatory frameworks, trade procedures and data standards is key to reducing task duplication, risks and lost time in customs processing in the region.”

“Adaptive architecture can help customs authorities navigate technological change and uphold data security, encouraging seamless data exchange across borders and supporting smoother and faster trade” advised Dr Bayhaqi. “Blockchain technology, while not yet mature, has potential to promote paperless trade which could reduce documentation and processing costs. It could also enhance the visibility of goods as they move across the supply chain,” he concluded.