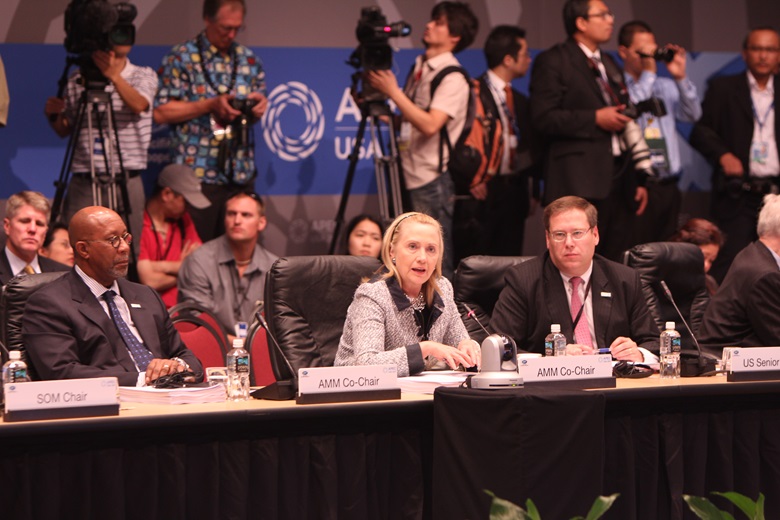 “Global trends and world events have given us a full and formidable agenda, and the stakes are high for all of us.” said Secretary Clinton in her opening remarks.

“We are each trying to generate balanced, inclusive, sustainable growth that delivers good jobs for our citizens; economic, social, and environmental progress for our nations; and shared prosperity for this region.”

In their joint statement, Foreign and Trade Ministers agreed to actions on integration and trade, including by addressing next-generation trade and investment issues that a future Free Trade Area of the Asia-Pacific should contain.

“APEC has traditionally been a laboratory for some of the best and newest ideas in global commerce.  We believe the outcomes of this year will keep APEC’s agenda on the cutting edge for the next 20 years.  We want to ensure that new regional agreements anticipate and address 21st century issues relevant to business in the region,” said Ambassador Kirk.

“We also have successfully addressed challenges that small and medium-sized businesses face when doing business in the region,” said Ambassador Kirk when he discussed the outcomes of the APEC Ministerial Meeting at a joint press conference today.

Trade Ministers also discussed the Doha Development Agenda and released a standalone statement emphasizing “our collective deep concern regarding the impasse that now clearly confronts” the agenda and the reality that a conclusion of all elements is unlikely in the near future.

They committed to approaching the World Trade Organization trade negotiations “with a view to fresh thinking and a determination to begin exploring different, innovative and credible approaches.”

Ministers also reaffirmed and extended their commitment through 2015 to refrain from raising new barriers to investment or to trade in goods and services, imposing new export restrictions, or implementing WTO-inconsistent measures in all areas.

APEC Ministers acknowledged the uncertain global trading environment, including signs of increased protectionist measures, which continue to be a matter of serious concern.

Other areas targeted for action include: improving supply chain performance by establishing de minimus values that exempt shipments from customs duties; promoting trade and investment in environmental goods and services; and strengthening good regulatory practices by ensuring internal coordination of rule-making, assessing the impact of regulations, and conducting public consultations in APEC economies.

Secretary Clinton also hosted a High-Level Policy Dialogue with Ministers, senior officials and business leaders on reducing disaster risk and strengthening economic resiliency, in the wake of the Japan earthquake and tsunami, floods in Thailand and other recent natural disasters in the region.

Ministers issued a standalone statement calling on officials to work towards improving disaster resiliency, including by working with businesses to develop specific tools to help them prepare for natural disasters.

Secretary Clinton hosted a second High-Level Policy Dialogue on open governance, which, along with transparency, is critical to economic competitiveness, leading to sustainable economic growth.

“We share the belief that markets, trade, and investment are vital to our prosperity,” Secretary Clinton said. “So today, I look forward to hearing from everyone about ways we can continue to build an enduring regional economic architecture that is open, free, transparent, and fair.”