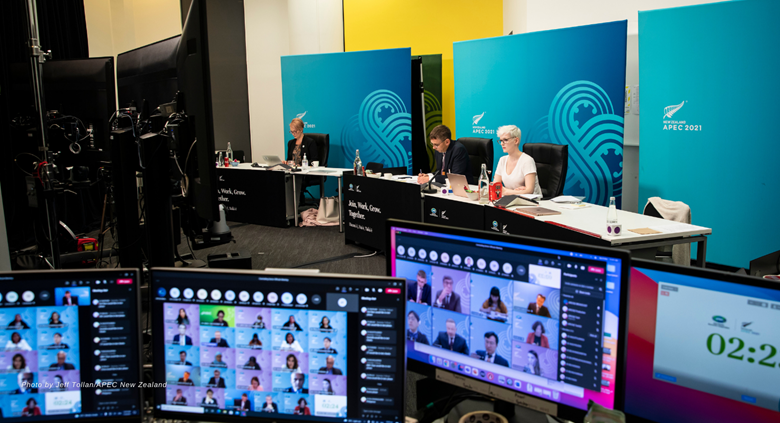 Under the theme “Join, Work, Grow. Together,” leaders, ministers and senior officials from APEC’s 21 member economies will solidify their commitment to responding to the health and economic crisis and collectively determine a path for the region’s recovery that ensures resilience and sustainability.

“There was never a more important time for economies to work together to share, rebuild and recover,” said Vangelis Vitalis, the 2021 Chair of APEC Senior Officials who concluded technical discussions on Friday, which sets the stage for ministers to round out concrete commitments on Monday and Tuesday. “Senior officials have met throughout the year and worked intersessionally on various programs to advance APEC’s work to be responsive to the crisis and relevant to the recovery.”

Actions on the table center on economic and trade policies that strengthen recovery, increase inclusion and sustainability for recovery, and pursue innovation and a digitally enabled recovery.

"Any recovery needs to take into account the impact of this crisis on women and youth, as well as on Indigenous populations and small businesses," Vitalis added. "That will be key to our region's successful recovery."

Beyond setting a course through the current crisis, senior officials have discussed APEC’s work for the next two decades in the form of a plan to implement the APEC Putrajaya Vision 2040.

The week will culminate with the APEC Economic Leaders’ Meeting on 12–13 November, to be chaired by Prime Minister Ardern, which will provide the strategic vision and directives for future collaboration between APEC member economies.

It will be preceded by the APEC Ministerial Meeting, co-chaired by New Zealand Minister of Foreign Affairs Nanaia Mahuta and Minister for Trade and Export Growth Damien O’Connor on 8–9 November.

APEC member economies together account for about three billion people, half of global trade, 60 percent of total GDP and much of the world’s growth. The region’s outlook will be assessed in the APEC Policy Support Unit’s latest economic trends analysis and trade monitoring reports to be unveiled on 8 November, setting the tone for the week’s policy discussions.