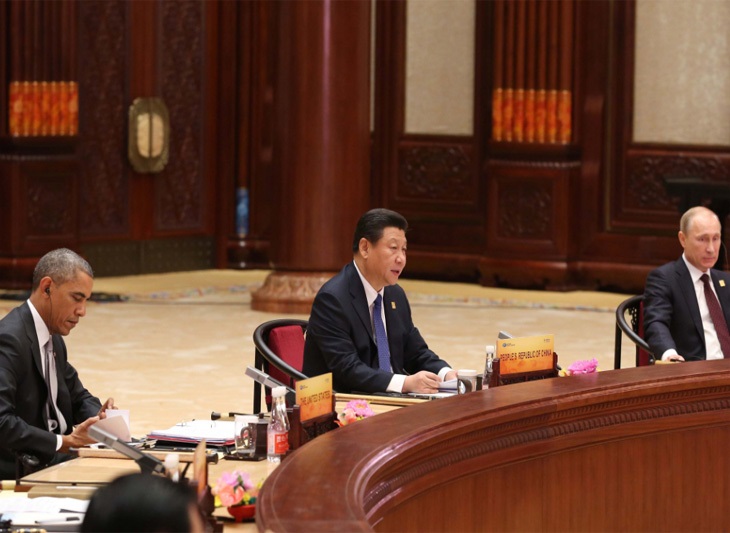 China’s President Xi Jinping opened the 22nd APEC Economic Leaders’ Meeting on Tuesday at Yanqi Lake where the region’s Leaders are gathered to advance next generation measures for enhancing cooperation between member economies and manifest a new vision for sustainable, inclusive development across the Asia-Pacific.

“The world economic recovery still faces many unpredictable and destabilizing factors,” said President Xi. “The Asia-Pacific has entered a new stage of development.”

“In the face of new conditions, we need to intensify regional economic integration and foster an open environment that is conducive to long-term development,” he explained.

“While continuing to advance the Bogor Goals, we should vigorously promote the development of the FTAAP by identifying targets and laying out directions and roadmaps,” President Xi asserted. “This will help realize, at an early date, the vision of a highly open integration arrangement that spans across the Pacific Ocean.”

Leaders will consider a roadmap for achieving the APEC goal of an FTAAP, or Free Trade Area of the Asia-Pacific, and the contribution APEC can make to drive this process.

“We need to be innovative in development approaches—pursue development through innovation and reform instead of driving it the usual way by relying on factors of production and export,” President Xi added. “We need to advance scientific and technological innovation to facilitate energy and consumption revolution and make the Asia-Pacific region a global leader in achieving new technological revolution.”

A strategic blueprint for promoting global value chain development and cooperation and a new APEC Accord on Innovative Development, Economic Reform and Growth will be reviewed by Leaders. Attention will be on unlocking new growth drivers and stepping up efforts to address shared challenges such as urbanization, epidemics, food security, natural disasters and the effects climate change to ensure the well-being of the region’s people and economies.

“We need to speed up efforts to upgrade infrastructure and build comprehensive connectivity,” President Xi continued in view of the increasing volume of people and goods flows around the Asia-Pacific that is weighing on existing infrastructure and capacity for long-term economic growth in the region. “Our cooperation should extend to wherever roads, railways, air routes and the internet take us.”

“Connectivity is about connecting rules and regulations,” he added. “When coordination and cooperation are enhanced, and regulatory obstacles are reduced, logistics will become smoother and exchanges more convenient.”

The first-ever, long-term APEC Connectivity Blueprint will be considered by Leaders, including additional focus on improving the movement of people across the region and attention to potential targets and timelines.

“Some developing economies in the Asia-Pacific region now face difficulties,” observed President Xi. “We need to increase financial and technical support to developing members, give full rein to the strength of diversity among Asia-Pacific economies to draw on each other’s strength, better leverage the amplifying effects and achieve the common development.”

“It meets the common interests of us all to foster an open economy in the Asia-Pacific featuring innovative development, interconnected growth and converging interests,” he concluded. “All the economies in the region need to work together to build an Asia-Pacific partnership of mutual trust, inclusiveness, cooperation and win-win progress. This will inject new energy into the economic development of both our region and the world.”

A press conference by President Xi will be held at the conclusion of the APEC Economic Leaders’ Meeting.

APEC to Deepen Partnerships to Enhance Sustainability and Inclusion