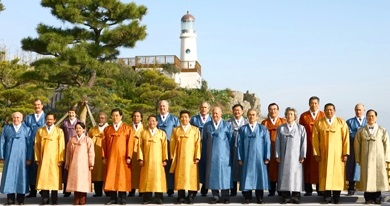 We, Economic Leaders of the member economies of the Asia Pacific Economic Co-operation (APEC), gathered in Busan, Korea, for the 13th APEC Economic Leaders' Meeting, under the APEC 2005 theme, "Towards One Community: Meet the Challenge, Make the Change," to advance our common vision of achieving stability, security and prosperity for our peoples. We reiterated the importance of the Bogor Goals of free and open trade and investment in the Asia-Pacific, and we pledged to work towards this with the Busan Roadmap. With this renewed commitment, this year, we dedicated ourselves to ensure a transparent and secure business environment in this region in order to lay a stepping stone towards our vision. We also confronted the challenges and exerted our utmost efforts to bridge the various gaps and differences existing in the region. As a result, APEC, as the single forum encompassing the Asia-Pacific region, has not only kept its past pledges but also has succeeded in presenting the future direction that APEC should be heading towards.

With a firm belief that the engine of this region's economic growth is a strengthened multilateral trading system, APEC Economic Leaders have supported the World Trade Organisation (WTO) since the inception of the Leaders' Meeting. We believe that APEC, as a forum of the world's leading trading economies must manifest leadership in strengthening the multilateral trading system. We showed our strong political will in a separate statement, in which we declared our firm support for the WTO Doha Development Agenda (DDA) negotiations to proceed expeditiously so as to achieve an ambitious and overall balanced outcome at the end of the Round. We also supported the efforts to promptly conclude the accession of Russia and Viet Nam to the WTO.

We welcomed the outcomes of the Midterm Stocktake on the progress towards achieving the Bogor Goals, which confirm that APEC has made momentous strides towards free and open trade and investment. We are convinced that both our individual and collective efforts towards the Bogor Goals have contributed to rapid and sustained economic growth as well as to significant improvements in the welfare of our people.

To respond to new challenges that emerged from the evolving international trade environment and to reach the Bogor Goals by the declared timelines, we endorsed the Busan Roadmap to the Bogor Goals composed of:

We reaffirmed our commitment to advance economic and technical cooperation (ECOTECH) to ensure equitable growth and shared prosperity in the region. We underscored that ECOTECH was not only important by itself, but also a cross-cutting issue relevant to advance trade and investment liberalisation and facilitation.

We welcomed, in particular, one element of the Busan Roadmap, the Busan Business Agenda, which, in response to the specific concerns of our business community, calls for further reductions in trade transaction costs by five percent by 2010, a comprehensive business facilitation program, and new work on intellectual property rights (IPR), trade facilitation, anti-corruption, investment, and secure trade.

We agreed that high-quality RTAs/FTAs were important avenues to achieve free and open trade and investment and called for ongoing work to pursue high quality, transparency and broad consistency in RTAs/FTAs in the region. We also welcomed the APEC Trade Facilitation Model Measures for RTAs/FTAs that would serve to function as a meaningful reference for negotiating RTAs/FTAs, and called for the development of model measures for as many commonly accepted FTA chapters as possible by 2008.

In recognition of the importance of strong IPR protection and enforcement to economic growth and trade in the Asia-Pacific region, we welcomed the APEC Anti-Counterfeiting and Piracy Initiative and endorsed the model guidelines to stop international trade in counterfeit and pirated goods, reduce on-line piracy, and prevent the sale of counterfeit and pirated goods over the Internet. We also called for future work to address IPR protection and enforcement challenges in the region in 2006 in close consultation with the private sector.

We instructed Ministers to work on behind-the-border issues in order to enhance the business-friendly environment in the Asia-Pacific. We welcomed the adoption of the APEC Work Plan on the Leaders' Agenda to Implement Structural Reform toward 2010 (LAISR 2010) as a policy-oriented approach to bring about needed structural reforms. We also welcomed the initiative to develop a Private Sector Development agenda for APEC to create an enabling environment for small businesses.

We took note of the recommendations from the APEC Business Advisory Council (ABAC). We will continue to work with the business sector in our venture towards improving the business environment in the Asia-Pacific.

We condemned terrorist acts in the region that took thousands of lives and aimed to destabilise economic prosperity and security in the Asia-Pacific region. These acts constitute a clear challenge to APEC's goal of advancing prosperity and its complementary mission of enhancing security. To confront these ongoing threats, we reaffirmed our commitment made in Bangkok and Santiago to review progress on our efforts to dismantle trans-boundary terrorist groups, eliminate the threat of weapons of mass destruction and their means of delivery, and confront other direct threats to our region, and to take the appropriate individual and joint actions to further these important goals. We affirmed our commitment to ensure that any measure taken to combat terrorism comply with all relevant obligations under international law, in particular international human rights, refugee and humanitarian law.

We encouraged implementation of APEC counter-terrorism, secure trade and safe travel commitments. We welcomed new initiatives on the safe handling of and trade in radioactive sources, the reduction of airport vulnerability to Man-Portable Air Defense System (MANPADS), Total Supply Chain Security and the APEC Framework for the Security and Facilitation of Global Trade. We welcomed the successful Regional Movement Alert List (RMAL) pilot and work on its expansion in 2006, and capacity building undertaken to advance ship and port security standards and other security initiatives.

We recalled the horrific regional natural disasters of the past year and conveyed our condolences to the bereaved families. We committed to protecting our economies by taking action to lessen the impact from future disasters and improve our collective response capability. We commended Ministers for their swift response to disasters this year.

We endorsed the APEC Initiative on Preparing for and Mitigating an Influenza Pandemic, which commits our economies to effective surveillance, transparency and openness, and close domestic, regional and international coordination and collaboration. We also committed to multi-sectoral preparedness planning, timely data and sample sharing, science-based decision-making regarding trade and travel, and early implementation, where appropriate, of the revised International Health Regulations. We supported efforts of the WHO, FAO, OIE, and the International Partnership on Avian and Pandemic Influenza, the outcomes of the APEC Meeting on Avian Influenza Preparedness and the Health Ministerial on Global Pandemic Influenza Readiness in 2005, and looked forward to the APEC Symposium on Emerging Infectious Diseases in 2006.

We agreed on collective, practical measures, including: strengthening cooperation and technical assistance among APEC economies to limit avian influenza at its source and prevent human outbreaks; developing a list of available and funded regional experts and capabilities for responding rapidly to pandemic influenza in its early stages; testing pandemic preparedness, beginning with a desk-top simulation exercise in early 2006 to test regional responses and communication networks; enhancing public and business outreach and risk communication; and exchanging information on border screening procedures and controls to increase transparency and to reduce risk to trade and travellers.

We shared our concern on the impact of high oil prices and agreed to respond to it urgently by addressing the supply and demand of the energy market simultaneously through: cooperative efforts to increase investment, to expand cross-border trade and to accelerate energy technology development, thereby reducing the region's vulnerability and securing its energy supply; and promotion of energy efficiency and conservation and persification measures, which would help to reduce the demand of fossil fuels and lower speculative demand in the oil industry.

We emphasised the need to develop increased energy resources in ways that addressed poverty eradication, economic growth, and pollution reduction, and the need to address climate change objectives. In this context, we welcomed the UN Climate Change Conference to be held in Montreal, Canada, later this year.

We agreed to intensify regional cooperation to deny a safe haven to officials and individuals guilty of corruption, those who corrupt them and their illicitly-acquired assets, and to prosecute those engaged in bribery, including in international business transactions. We further agreed that the implementation by our relevant economies of the principles of the United Nations Convention against Corruption can have a positive impact in advancing our commitment towards a cleaner and more honest and transparent community in the Asia-Pacific region. We welcomed the signing of the ABAC Anti-corruption pledge by the CEOs at the APEC 2005 CEO Summit and encouraged public-private partnership in this campaign.

APEC's Progress into the Future

We are confident that important milestones have been set this year in paving the way for APEC's future. We firmly believe APEC will increasingly contribute to its members' prosperity and meet any new challenge with confidence.

We acknowledged the importance of ensuring that all of our citizens have the opportunity to share the benefits generated by trade liberalisation and economic growth. We agreed to conduct a study of ways to confront the challenges and impediments related to socio-economic disparity issues. APEC intends to build on its ongoing work to expand the circle of beneficiaries of economic growth through such means as providing economic and technical cooperation, particularly, measures of capacity building, encouraging economic reforms and fighting corruption.

We recognised the significant contributions that women have made to the economic development of the region and committed to ensuring the integration of gender in the activities across all APEC fora.

We highlighted the importance of innovation and sharing advanced technologies among members in the years to come. We acknowledged the efforts made in reaching the Brunei Goals and instructed Ministers to maintain the momentum. We endorsed in full the message that APEC imparted to the World Summit on Information Society (WSIS).

We welcomed the concrete outcomes of APEC Reform efforts taken this year in making APEC more efficient and result-oriented. We instructed Ministers to continue to work on APEC Reform to respond to new concerns from member economies, civil society and business. We endorsed the measures taken to increase the productivity of APEC activities related to economic and technical cooperation.

We noted that our efforts have contributed to creating an Asia-Pacific community and welcomed the contribution of the cultural agenda to the efforts by facilitating a deeper understanding among the people and lowering psychological barriers.

We endorsed in full the Joint Statement agreed by Ministers at the 17th APEC Ministerial Meeting.