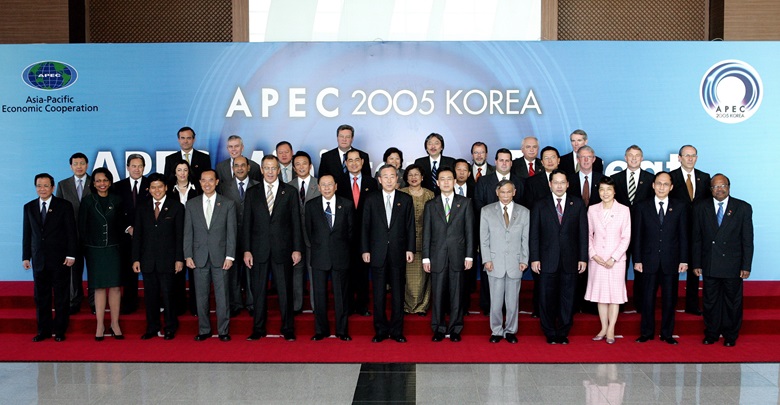 APEC Ministers from Australia; Brunei Darussalam; Canada; Chile; the People's Republic of China; Hong Kong, China; Indonesia; Japan; the Republic of Korea; Malaysia; Mexico; New Zealand; Papua New Guinea; Peru; the Philippines; Russia; Singapore; Chinese Taipei; Thailand; the United States of America; and Viet Nam, representing economies which collectively account for forty-six percent of world trade, fifty-seven percent of the global GDP and forty-five percent of the global population, gathered in Busan, Korea, on 15-16 November 2005, in order to participate in the Seventeenth Asia-Pacific Economic Cooperation (APEC) Ministerial Meeting. The APEC Secretariat was also present. The Association of Southeast Asian Nations (ASEAN) Secretariat, the Pacific Economic Cooperation Council (PECC) and the Pacific Islands Forum (PIF) attended as official observers. The meeting was chaired by H.E. Ban Ki-moon, Minister of Foreign Affairs and Trade and H.E. Hyun Chong Kim, Minister for Trade of the Republic of Korea.
Ministers focused discussions around the APEC 2005 theme: "Towards One Community: Meet the Challenge, Make the Change." They reaffirmed their commitment to achieving trade and investment liberalisation and facilitation in the APEC region by 2010 and 2020, and resolved to continually push it forward in this regard.
Ministers reviewed the key achievements of APEC 2005, which was hosted by the Republic of Korea, and agreed upon initiatives to be undertaken during the APEC 2006 year, which will be hosted by Viet Nam.
Ministers agreed to the following:
Strengthening the Multilateral Trading System

Mid-term Stocktake of the Bogor Goals
Ministers endorsed the report, A Mid-term Stocktake of Progress Towards the Bogor Goals: Busan Roadmap to the Bogor Goals. They commended the report for demonstrating APEC's good progress towards the Bogor Goals and for developing a roadmap to achieve the Bogor Goals and to meet the expectations of the business community in facilitating business activities. Ministers agreed to recommend that Leaders endorse the report.
Ministers recognised that APEC economies had achieved significant liberalisation and facilitation of trade and investment since 1994. They also noted that the rewards from these policy choices had been substantial and had contributed to sustained economic growth and significant welfare improvements in the region.
Ministers remained fully committed to achieving the Bogor Goals of free and open trade and investment in the Asia-Pacific by 2010 for developed members and 2020 for developing members as stipulated in the Bogor Declaration. Ministers emphasised that the Bogor Goals, the core organising principle of APEC, aimed at promoting sustainable growth and prosperity in the region.
Recognising that the environment for trade was constantly evolving, Ministers expressed the need for APEC to adapt its focus accordingly and to continue to deliver concrete and business relevant outcomes in the years ahead to realise the Bogor Goals. They agreed that, while the APEC agenda should be revitalised to keep pace with the new international trade environment, APEC must ensure the achievement of the Bogor Goals.
In order to accelerate progress towards the Bogor Goals, Ministers particularly emphasised the Busan Roadmap to the Bogor Goals, which outlines key priorities and frameworks, such as support for the multilateral trading system, strengthening collective and individual actions, promotion of high-quality regional trade agreements and free trade agreements (RTAs/FTAs), the Busan Business Agenda, a strategic approach to capacity building and the pathfinder approach, ensuring APEC to better respond to the new business environment and continuing to drive free and open trade and investment in the region through work on intellectual property rights (IPR), trade facilitation, anti-corruption, investment, and secure trade.
Ministers reaffirmed their deep commitment to the multilateral trading system and their support for the WTO. They agreed that APEC economies would continue to make contributions towards the successful outcome of the WTO DDA negotiations and that the APEC Geneva Caucus must redouble its collective efforts to advance the negotiations in all areas of the DDA. They agreed that, once the results of the DDA negotiations were known, APEC members would need to consider what further liberalisation steps would be needed to help reach the Bogor Goals.
Ministers agreed that Individual Action Plans (IAPs) and Collective Action Plans (CAPs) were the major vehicles in achieving the Bogor Goals. They agreed to strengthen the IAP Peer Review processes and make them more transparent and accessible to business. Ministers consequently agreed that the next round of the IAP peer reviews would be conducted from 2007-2009 under the strengthened review framework.
They agreed that high-quality RTAs/FTAs maximised the contribution of these agreements to APEC-wide progress towards the Bogor Goals. Ministers agreed that APEC would develop by 2008 comprehensive model measures on as many commonly accepted RTA/FTA chapters as possible by building on its work in developing model measures for trade facilitation, taking into account the diversity of APEC economies. They agreed that this would be a valuable contribution to maintaining consistency and coherence across RTAs/FTAs in the region.
Ministers agreed that APEC must develop a comprehensive business facilitation program along with strategies, taking into account the diversity of member economies with respect to economic development and domestic policy objectives that also addressed behind-the-border administrative burdens and impediments to trade and investment.
They also underscored the need for APEC to continue to put emphasis on economic and technical cooperation (ECOTECH) to ensure that the Bogor Goals were not only reached, but that their potential benefits were distributed as broadly as possible within the Asia-Pacific community.
Ministers encouraged the implementation of the decisions and commitments taken in the APEC context, both individually and collectively, while preserving APEC's core principles of voluntarism, comprehensiveness, and consensus-based decision-making.
Trade and Investment Liberalisation and Facilitation (TILF)
Ministers endorsed the 2005 Committee on Trade and Investment (CTI) Annual Report to Ministers on APEC's Trade and Investment Liberalisation and Facilitation activities, including the revised/enhanced CAPs, and commended the progress made by the CTI in implementing the CAPs. They welcomed the achievements, in particular, in the following areas:

Ministers welcomed the fruitful outcomes of the APEC Symposium on Assessment and Benchmark of Paperless Trading held in China in September. Ministers urged all member economies to strengthen cooperation in this area with a view of reinforcing mutual cooperation and pushing forward the achievement of APEC's paperless trading goals.

They welcomed the initiative by Australia and Viet Nam for a targeted process of 2006 and endorsed the development of a comprehensive business facilitation program, which builds on the gains made by the TFAP and the Santiago Initiative for Expanding Trade in APEC and also draws in the APEC Finance Ministers' Process and ABAC to develop effective strategies and modalities.

Ministers welcomed outreach efforts by the CTI and the APEC Secretariat to showcase APEC's achievements and future plans in the area of trade facilitation, including the publication of a business outreach brochure.

In implementing counter-terrorism commitments, Ministers noted the importance of minimising costs associated with cross-border business transactions. With this in mind, as APEC continues its progress on trade facilitation, economies will work to apply improved technology and procedures, and offer capacity-building to this end. Ministers affirmed their commitment to ensure that any measures taken to combat terrorism comply with all relevant obligations under international law, in particular international human rights, refugee law and humanitarian law. Ministers welcomed the outcomes of the APEC Human Security Seminar co-hosted by Japan and Thailand in Tokyo in October.

Ministers welcomed the work on the APEC Framework for the Security and Facilitation of Global trade, which is based on the World Customs Organisation (WCO) Framework of Standards to Secure and Facilitate Global Trade and to create an environment for the secure and efficient movement of goods, services and people across the borders. They noted that the APEC Framework would lead to the implementation of international standards for securing and facilitating the global supply chain within the APEC region.

Ministers welcomed the development by the APEC Secretariat of the APEC Collaboration and Meeting System (ACMS) and an APEC Information Management Portal (AIMP).

Guidebook on APEC Procedures and Practices:

Ministers welcomed the Guidebook on APEC Procedures and Practices prepared by the APEC Secretariat as a key reference document for hosts in preparing future APEC meetings.

Ministers welcomed APEC's interaction with its Official Observers, the ASEAN Secretariat, Pacific Economic Cooperation Council (PECC) and the Pacific Islands Forum (PIF), and noted their recommendations for APEC such as contained in the PECC Seoul Declaration adopted this year.

Ministers noted the preparations for APEC 2006 by Viet Nam. They noted that future APEC Ministerial Meetings would be held in Australia in 2007, Peru in 2008, Singapore in 2009 and Japan in 2010.

Ministers approved the SOM report, including the decision points therein, in particular, the proposed APEC budget and the assessment of members' contributions for 2006.