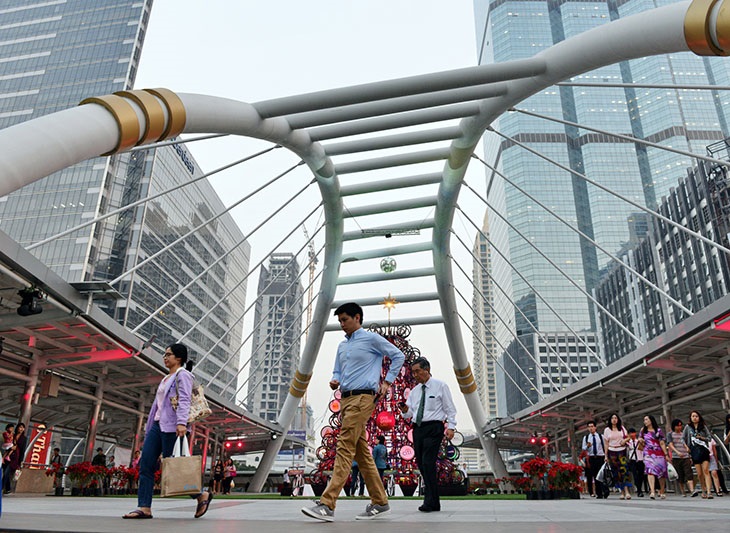 Seismic shifts in economic and social conditions in the Asia-Pacific compounded by uncertainty in the world economy are contributing to unease about the future and raising scrutiny of globalization. But greater interconnectivity of people and markets, not less, is needed to mitigate emerging challenges to regional growth and human development, according to APEC Secretariat Executive Director Dr Alan Bollard.

The outlook for transitioning Asia-Pacific economies and their policy regimes was the focus of keynote remarks by Dr Bollard during a regional business forum that just concluded in Bangkok. He noted that sustained efforts in APEC to foster more open, integrated member economies could help to boost their ebbing trade while positioning them to tackle mounting structural impediments to productivity and social well-being.

“The Asia-Pacific continues to grow but is no longer the world’s leader of growth and the slowing of trade is at the heart of the problem,” Dr Bollard explained. “The shortcomings of globalization in today’s changing environment are increasing the risk of protectionism that could further weigh on economies.”

The 21 APEC economies are forecast to grow 3.4 per cent in 2016, the same as world GDP growth, the APEC Policy Support Unit reports. This is up from 3.1 per cent growth in APEC in 2015, which was undermined by a contraction in regional trade. Keeping trade and investment barriers in check and taking next steps to enable more people and businesses to take advantage will be an important determinant of future prosperity.

“There is still considerable potential in the Asia-Pacific for growth in sectors like services trade and small business participation in supply chains,” he continued. “APEC is pressing ahead to address bottlenecks at and behind borders for it to be fully realized.”

APEC economies are pursuing new targets to improve the ease of doing business in the region, with focus on reducing the time it takes to start a business, obtaining financing and permits, and trading across borders. They are also deepening policy collaboration to cut red tape at immigration and customs checkpoints as well as harmonize their industry regulations and standards. The aim is to make them simpler for businesses to navigate and incorporate best practices for ensuring food safety, clean and efficient energy use, and personal data privacy, among other sustainability goals.

At the same time, APEC economies are ramping up information sharing and technical assistance to facilitate trade agreements that go beyond the reduction of tariffs alone to address emerging issues such as hurdles to innovation and digital development. Parallel emphasis is on opening cross-border education and career development opportunities in coordination with the private sector. They include new scholarships and internships, skills training and certification programs to build compatible labor forces and improve living standards in the region.

“Harnessing innovation is vital to accommodating higher volumes of people, goods and data moving between Asia-Pacific economies that can power growth as well as to boost their shared capacity to meet changing social needs,” Dr Bollard concluded.

Representatives from the APEC Business Advisory Council will meet in Port Moresby, Papua New Guinea on 25-28 April to flesh out new policy recommendations for APEC economies. They will be among the issues on the table during the 2016 APEC Ministers Responsible for Trade Meeting on 17-18 May in Arequipa, Peru and preceding meetings of APEC Senior Officials and technical working groups there from 5-15 May.