APEC Senior Officials established the Anti-Corruption and Transparency Experts Working Group (ACTWG), firstly as an “Anti-Corruption Task Force,” in 2004 in Santiago, Chile. That year, APEC Leaders recognized that corruption was a serious threat to the APEC agenda and its priorities of sustainable economic growth, good governance, market integrity and enhanced trade and investment in the Asia-Pacific region. Leaders recognized that APEC could make a difference by working together to fight corruption and promote transparency. The task force was upgraded to a working group in March 2011 to institutionalize and structure its work.

The purpose, structure and administration of the ACTWG are laid out in its Terms of Reference and in the ACTWG Strategic Plan for 2019–2022, which can be accessed here.

The ACTWG is tasked to:

The ACTWG has one subsidiary body, the Network of Anti-Corruption Authorities and Law Enforcements Agencies (ACT-NET), which was established by the ACTWG during its 17th meeting in Indonesia, 2013. The first plenary meeting of the ACT-NET was held in 2014, Beijing. The terms of reference of the network can be accessed here.

The ACT-NET, consistent with each economy’s legal system, has three main functions:

The 8th ACT-NET Plenary Meeting was held virtually on 18 February 2021 chaired by New Zealand. The 2021 Chair of the ACT-NET is Mr. Graham Gill from New Zealand’s Serious Fraud Office.

The ACTNET will have its ninth plenary meeting at the 3rd APEC senior officials’ meeting cluster in August 2021.

President of the National Anti-Corruption Commission of Thailand (NACC) 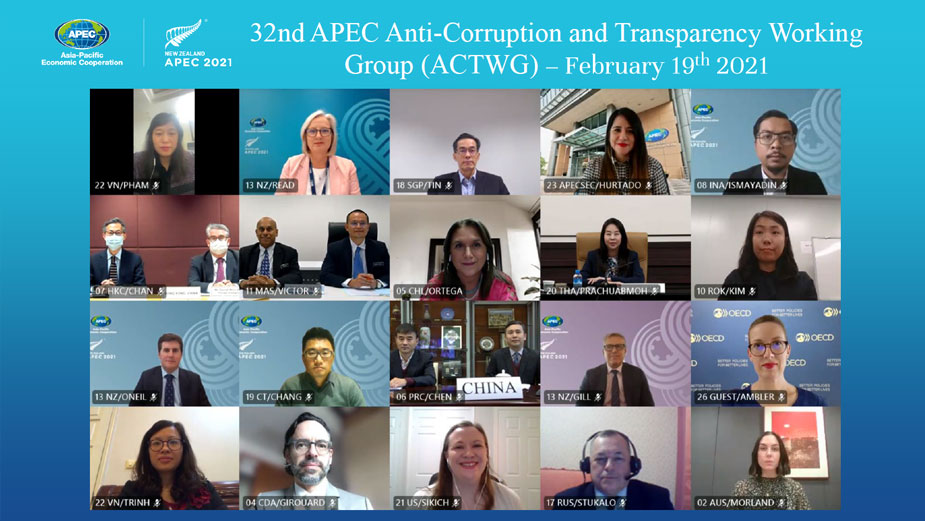 The ACTWG holds two annual plenary meetings on the margins of the first and third senior officials’ meetings (SOM1 and SOM3).

The 32nd ACTWG Plenary Meeting was held virtually on 19 February 2021. The 2021 Chair of the ACTWG is Mrs. Julie Read, Director of New Zealand’s Serious Fraud Office

The 33th ACTWG Plenary Meeting will take place virtually at SOM3 in August 2021.

These are the group’s latest events and/or initiatives:

The Disproportionate Impact of Corruption on Women and Vulnerable Groups