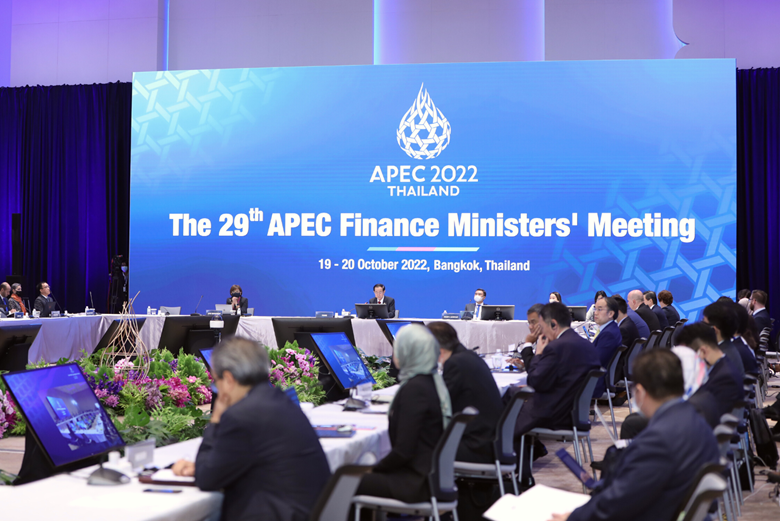 Finance ministers and high-level representatives from the 21 APEC member economies convened in Bangkok against the backdrop of an adverse global environment—where recovery from the pandemic remains fragile and rising inflation is necessitating financial tightening all over the world—and the increasing risk of climate change.

Under the theme of “Advancing Digitalization, Achieving Sustainability,” Thailand’s Minister of Finance and the Chair of the 2022 APEC Finance Ministers’ Meeting, Arkhom Termpittayapaisith, stressed the importance of striking a balance between growth and taking care of the environment, highlighting that digitalization and sustainability “will be the key to APEC’s prosperity.”

“Digitalization has proven to be a key driver of growth, especially in an increasing globalized environment,” Minister Arkhom said in his opening remarks. “Nevertheless, such growth should not come at the cost of a significantly worsening environment, which is why sustainability remains high on the global agenda, including in APEC.”

While the economic outlook remains uncertain, Minister Arkhom reflected on some of the encouraging tailwinds that can ignite a new growth cycle. “Besides digitalization and sustainability, the resurgence in the travel and tourism sector, as well as other economic activities, reflects pent-up demand,” Minister Arkhom added.

“We need to deepen our cooperation in developing strategic, measured and innovative responses in order to keep the world economy steady and propel it forward, especially in the areas which require our collective action, such as climate change, sustainable development and digital connectivity,” he said.

Meeting at the Queen Sirikit National Convention Center, where APEC Economic Leaders’ Week will be held in November, finance ministers deliberated about inflationary pressure, and, among other things, how to redirect stimulus measures from COVID-19 to long-term growth drivers while maintaining fiscal sustainability.

Recognizing the unprecedented risk ahead, finance ministers committed to keeping inflation at bay to mitigate the rising cost of living and poverty. They also committed to keeping trade open while protecting people from the resurgence of COVID-19 or any future pandemics.

Ministers also expressed their respective views regarding the heightened macroeconomic challenges and their effects on energy and food prices volatility.

“The current political difficulties might have led to conflicting views among member economies,” Minister Arkhom concluded. “However, we need to demonstrate the spirit of international cooperation which has been central to the successes of APEC over the years, engage with each other productively and constructively, as this will lead to shared prosperity that can be cherished by all.”