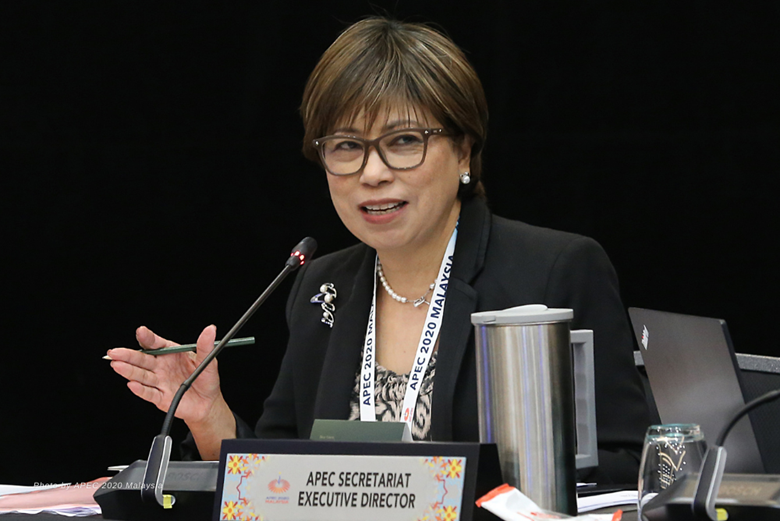 Dr Rebecca Fatima Sta Maria has been reappointed Executive Director of the APEC Secretariat, the coordinating and technical advisory body for advancing the joint initiatives of the 21 APEC member economies.

The decision was announced on the heels of APEC Economic Leaders’ Week hosted by New Zealand. Dr Sta Maria’s second term of office will start on 1 January 2022 and will run for three years.

“Dr Sta Maria’s leadership has been critical in guiding the APEC Secretariat through the most challenging global crisis where support for the institution, host and member economies in navigating the region’s work and priorities remain as strong as ever,” said Vangelis Vitalis, the Chair of 2021 APEC Senior Officials.

Dr Sta Maria has served as the APEC Secretariat’s executive director since 2019, advancing implementation of APEC member economies’ priorities during the host years of Chile; Malaysia; and New Zealand.

This includes administering APEC projects undertaken by member-economy officials under working-level APEC fora and which put the policy directives of the region’s leaders and ministers into action. Her administration emphasizes on improving the bandwidth of APEC’s diverse membership to liberalize and facilitate trade and investment, realize greater regional economic integration.

APEC members fund around 100 projects annually to bridge knowledge and resource gaps between them and achieve common policy objectives, coming in the form of technical workshops and information-sharing dialogues, training sessions and policy research. Over 2,700 projects have been undertaken since APEC initiated project work and founded a Secretariat in 1993.

“Cooperation between member economies plays a significant role in overcoming a crisis such as COVID. The pandemic has made it clear that the imperative is for more regional and international cooperation. It has taught us that none of us can go at it alone,” Dr Sta Maria said.

“Strengthening the team of diplomats, experts and professionals at the Secretariat is crucial as we continue to advance multilateral cooperation for a more inclusive and sustainable future,” she added.

Dr Sta Maria joined the APEC Secretariat as executive director after more than three decades of service in various capacities with Malaysia’s Ministry of International Trade and Industry. She served as the Secretary General of the Ministry from 2010 to 2016, leading Malaysia’s negotiations for the regional trade agreement known now as the Comprehensive and Progressive Agreement for Trans-Pacific Partnership (CPTPP).

Dr Sta Maria’s second three-year term will include the APEC host year of Thailand in 2022. Offers for the United States to host in 2023 and Peru in 2024 were welcomed by New Zealand’s Prime Minister Jacinda Ardern who chaired the APEC Economic Leaders’ Meeting on 12 November.