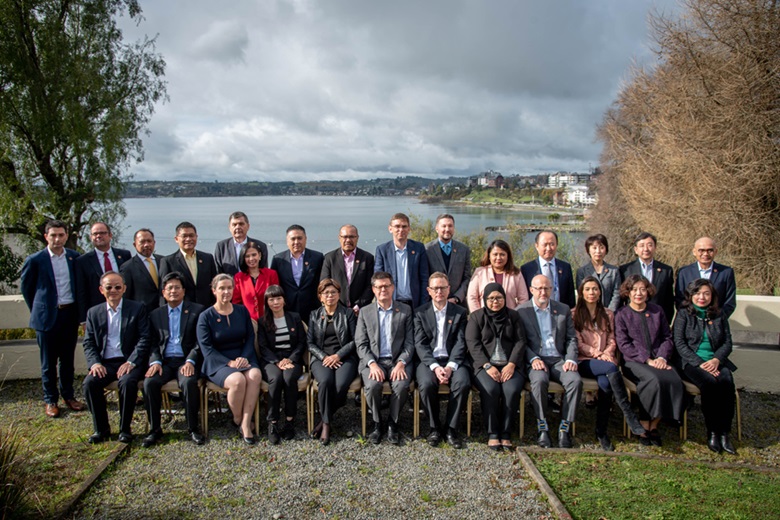 APEC Senior Officials are in the midst of a timely cluster of trade and sectoral meetings this month in Puerto Varas, a city beside one of Chile’s largest lakes and in the shadow of active volcanoes.

In this scenic setting, APEC delegates engaged in constructive dialogue about how to adopt to a changing world. Amid ongoing global frictions over trade, officials specializing in varied sectors—such as trade, competition policy, investment, food security and the environment—worked to establish areas of common interest and concern. Their talks will shape policy in the Asia-Pacific region for the years to come.

“APEC is at a crossroads,” said Mathias Francke, chair of APEC 2019 Senior Officials. “The world is very different from the way it was when APEC was first formed.”

APEC officials have commenced work on determining the forum’s direction beyond 2020—the region’s aspirational target year for realizing free and open trade and investment and a cornerstone of the forum’s work over the past decades.

Over the course of the meetings, delegates referenced the various challenges the region faces and with which it must come to terms. Some were environmental, such as the economic impact of climate change, over fishing and abundant marine debris. Some were related to the slowdown of global trade and the uncertainties caused by trade tensions. Others still were more people-centred—the effects of digital technologies on people and their livelihoods, and the economic inequalities faced by underrepresented sectors of society.

Many of these challenges have equivalent initiatives in varied stages of rollout.

“We must assess APEC’s achievements, shortcomings and gaps, as well as emerging trends in the global and regional landscape,” Francke said. “We must identify APEC’s vision, direction and main areas of cooperation, to better face current challenges and make the most of opportunities.”

Addressing his fellow senior officials, he proposed that the forum “must send a strong message for when we set a vision for APEC after 2020.” He stressed the need to keep the APEC agenda relevant and streamlined.

“We need to be focussed, we have to be clear and we have to keep to what is really important for us and for our constituents,” he explained, noting that their collective recommendations will highly influence the high-level statements to be made by APEC Ministers and Leaders later in the year.

While senior officials set the overall vision, ministers are holding high-level policy discussions for specific economic sectors: food security ministers met in Puerto Varas in mid-August, while ministers in charge of policy for small and medium sized enterprises are meeting in the city of Concepcion next week.

This will be followed by the APEC Women and the Economy Forum in September to address barriers to greater women’s entrepreneurship and participation in the digital economy.

The APEC Finance Ministers’ Meeting will take place in October to address issues such as financial inclusion and infrastructure financing vital to digital development.

It will all lead up to the APEC Economic Leaders’ Meeting in November.