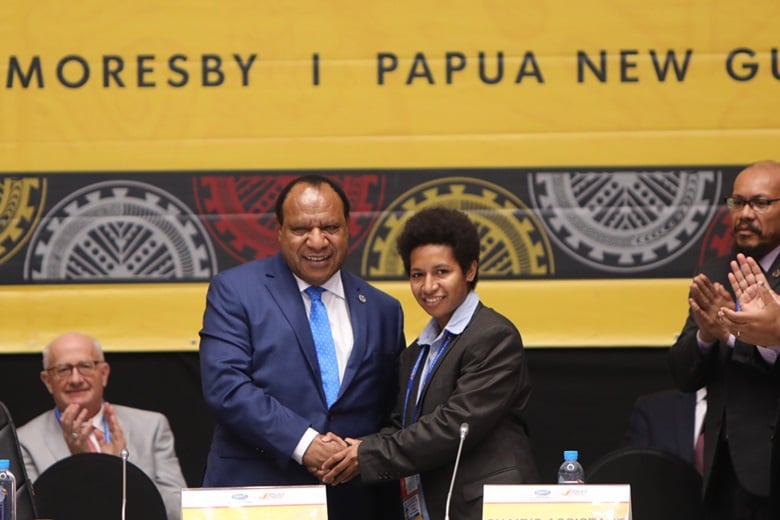 Twenty-year-old Papua New Guinean software engineer, Crystal Kewe, has been named the winner of the 2018 APEC Digital Prosperity Award, in recognition of her groundbreaking app for boosting grassroots participation in international trade.

Her award for this achievement was announced during the APEC Ministerial Meeting in Port Moresby on the eve of the APEC Economic Leaders’ Meeting here this weekend.

“Bilum is very important in our culture. The idea behind Biluminous is to provide a platform that unifies all the bilum weavers across Papua New Guinea, features their profiles and bilum making process, and connects them to buyers,” Kewe explained.

“It is an honor for me as a young Papua New Guinean to be recognized as the recipient of this award during APEC 2018. This proves that people can contribute to our economy through innovative technologies that enable our local businesses to expand their market reach beyond what was previously thought possible,” she added.

Bridging digital development gaps is a priority during Papua New Guinea’s APEC hosting and the pursuit of new policy breakthroughs will be a focus during the APEC Economic Leaders’ Meeting.

“The goal of our APEC host year is to help people embrace the digital future and take advantage of the huge opportunities that it creates,” said Papua New Guinea Prime Minister Peter O’Neill, who is also the chair the APEC Economic Leaders’ Meeting. “Crystal, through her app, clearly demonstrates how we can level the playing field for businesses on the small end of the spectrum in the digital economy.”

Micro, small and medium enterprises are the engine of growth for APEC member economies, accounting for 97 per cent of all business and more than half of employment in the region. However, only about five per cent of these businesses are directly involved in trade.

“Maximizing the potential of the digital economy requires us to focus on more than just big platforms but also the integration of small, local firms,” said APEC Secretariat Executive Director Dr. Alan Bollard. “The Biluminous app is a very concrete illustration of how internet-based technologies can open up new growth drivers at a grassroots level.”

The APEC Digital Prosperity Award spotlights an outstanding new digital product that uses innovation to increase prosperity and inclusive growth across economies in the Asia Pacific region. The award’s selection committee is comprised of The Asia Foundation, the APEC Secretariat, APEC Papua New Guinea and Google.

“Digital technology is playing an increasingly important role in engaging rural communities and facilitating more inclusive economic growth,” said David Arnold, President of The Asia Foundation. “Biluminous is an app that does just that and will hopefully inspire others to pursue their own new and innovative ideas.”

"APEC economies are full of talented people - what they need is the opportunity to showcase their skills to the world. Online tools and platforms give people the ability to access economic opportunities that weren't previously possible,” concluded Karim Temsamani who is President of Google Asia-Pacific.