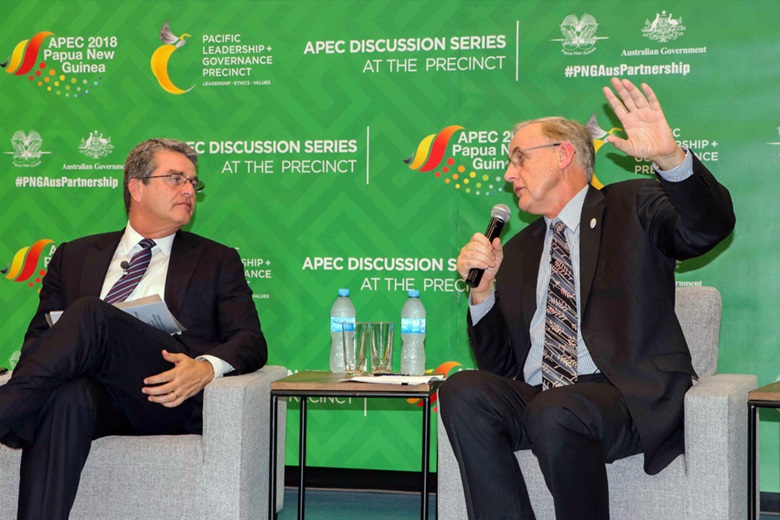 The two chiefs described the role coordinated trade reforms can play in delivering more robust and inclusive growth in the Asia-Pacific and broader global economy during a trade symposium at the University of Papua New Guinea in Port Moresby.

The exchange sets the tone for a cluster of technical meetings of trade and sectoral officials from the 21 APEC member economies to better position them to address development and implementation challenges, to take place here from 4-20 August.

“How trade policy unfolds in the region and its implications globally could have a significant impact on the direction of growth and employment in the near-term and beyond,” explained Dr Alan Bollard, Executive Director of the APEC Secretariat.

“We want to make sure that there are good rules for international trade that will translate to continued improvements in living standards for people all around the Asia-Pacific,” Dr Bollard added. “APEC has an opportunity to lead the way towards achieving these goals.”

Dr Bollard pointed to the growth of Papua New Guinea’s economy and doubling of its per capita income since joining APEC a quarter century ago as both a testament to the uplifting potential of trade cooperation and guide to moving forward in the region.

“The people of Papua New Guinea are roughly twice as well off as their parents in economic terms as a result of greater interconnectivity with regional trading partners but there is still much work to be done to reach those who have not felt the benefits,” said Dr Bollard. “This is a familiar story right around the region that is driving our work in APEC today.”

Initiatives on the table range from addressing rules of origin requirements and enhancing market access for agricultural producers, small scale farmers among them, to reducing the time and cost to start a business and trade across borders through regulatory reform and digital development.

This includes building on APEC’s region-wide implementation of the Trade Facilitation Agreement under the WTO, cutting customs red tape for traders large and small at borders. It also includes channeling APEC leadership that delivered the Information Technology Agreement and its expansion to widen access to new technologies by eliminating tariffs.

“The Asia-Pacific region is a dynamic example of how trade initiatives being pursued at the regional level can have a significant and positive impact on the multilateral system,” noted Roberto Azevêdo, Director-General of the WTO.

“Papua New Guinea's leadership in APEC this year is a clear sign of that international engagement,” Azevêdo concluded. “This is very positive. Groupings like APEC can complement the multilateral system and act as a building block for global trade.”