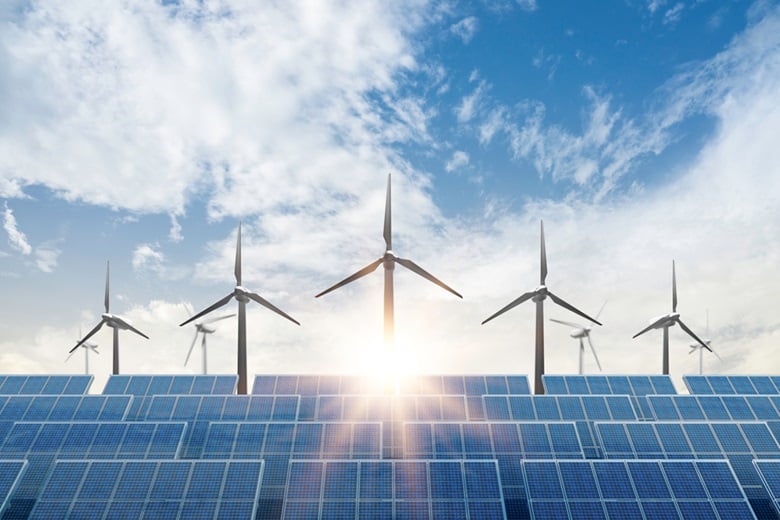 In 2012, APEC Leaders endorsed a groundbreaking initiative for green trade policy cooperation — a commitment to reduce applied tariff rates on a list of 54 environmental goods to 5 percent or less by the end of 2015. The intent was to promote the use of environmental technologies and contribute to green growth.

It has since been one of APEC’s flagship initiatives and compelling evidence of the forum as a place of innovation and a test kitchen of ideas to improve multilateral cooperation.

However, this was nearly a decade ago; much has happened since then, and especially in the past year. With a view to APEC’s focus on sustainability, it is time to consider the evolution of the trade in environmental goods, analyze the main barriers affecting their trade, and evaluate how far environmental policy has come.

Since endorsement, APEC has intensified its trade in a significant majority of the products belonging to this list. In APEC economies, the largest increase of exports and imports involved components for recycling systems and products used to manage solid and hazardous waste, for environmental monitoring analysis, as well as the aforementioned solar photovoltaic cells.

However, there were some products in the list that experienced a decline in their trade as they became obsolete or less cost-efficient. Between 2012 and 2019, for example, the most significant fall in both imports and exports were seen by solar heliostats — the reflective device associated with concentrated solar power. Compare this with an increase in trade of solar photovoltaic cells, a different solar power technology was more attractive to investors due to its relatively low cost. Other products with falling exports include electric generating sets; steam turbine parts; and crushing, grinding and waste compactor machines for solid waste treatment. 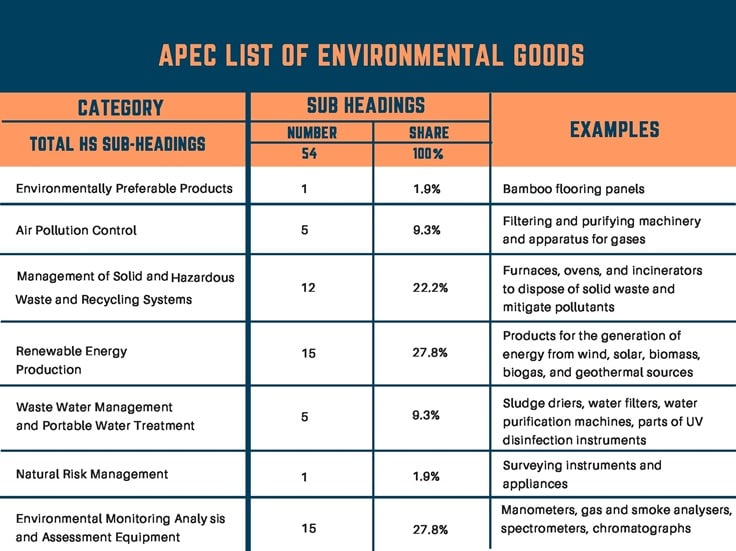 The surge of trade in environmental goods may be attributed to several reasons. Tariff reductions, to which APEC’s work has contributed, have made green technologies more affordable and available. Environmental awareness and activism have steadily grown in popularity, especially in recent years, and there is a general trend to develop and use fewer polluting technologies as well as more environmentally friendly products. This has led to governments mandating more regulation to protect the environment, the implementation of which requires the use of environmental goods. Furthermore, there’s the expeditious technological progress in developing alternative energy sources and energy-efficient goods — governments have helped move this along with environmental policy-driven incentives and other supporting measures. Finally, high international oil prices have motivated the development of new energy-efficient products and new technologies to replace fossil fuels.

The current most favored nation (MFN) average tariff for the products in the APEC List of Enviromental Goods is below 5 percent for all but one APEC economy.

Trade in environmental goods is also affected by non-tariff measures (NTMs), both technical and non-technical. Technical NTMs refer to the characteristics of a product, its technical specifications, and its production process while non-technical NTMs are not related to product-specific properties, but to trade requirements. For example, a local content requirement demanding that all solar panel systems only use solar inverters produced locally could affect trade of solar inverters and increase the cost of local solar panel systems.

The products in the APEC List support several activities related to environmental protection and resource management. Expanding it will greatly help the region cope with the environmental challenges that have truly entered the mainstream consciousness in recent years, especially climate change adaptation and mitigation.

Any discussion to expand the list should keep in mind certain considerations, such as how it would benefit APEC members economically, especially developing economies, which often bear the brunt of the ill effects of climate change. One possible way to go about it is to add in the list less technology-intensive products which are already part of complex global value chains of environmental goods and are manufactured in developing economies.

In addition, APEC economies should contemplate the inclusion of adapted goods — goods that have been specifically modified to be more “environmentally friendly” or “cleaner” and whose use is therefore beneficial for environmental protection or resource management.

Discussions which will be held over the course of 2022, guided by Thailand’s focus on sustainability and the bio-circular-green economy, will be essential, not just in expanding the list, but in planning the region’s collective agenda for a decade that is crucial for our environmental future.

Carlos Kuriyama is a senior analyst at the APEC Policy Support Unit and the author of the policy brief, “A Review of the APEC List of Environmental Goods,” on which this article was based. To read more about this topic, download the paper.