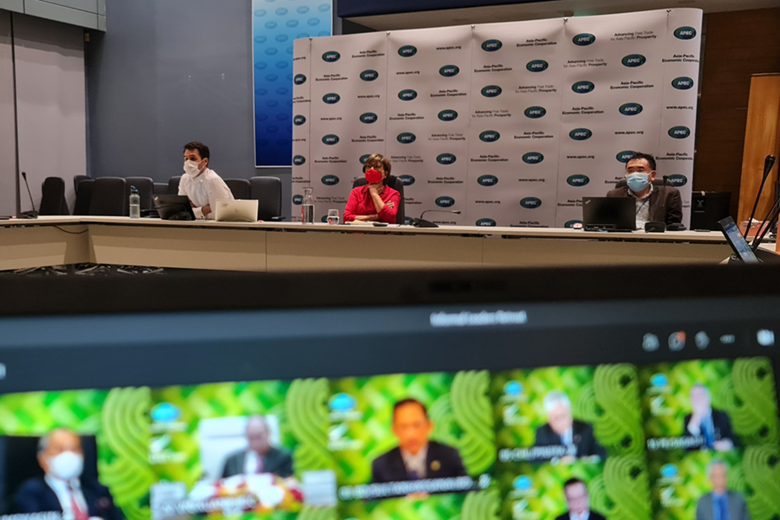 By meeting in July, APEC Leaders break tradition to highlight the importance of coming together amid the crisis

The first COVID-19 vaccines were born from great need and rapid innovation. Normally an arduous process involving years of funding applications, negotiations, investigations, testing and production, development of the pantheon of vaccines inoculating the world right now was completed at a rapid pace. Faced with crisis, scientists, doctors, manufacturers, and regulators from around the world worked hard, fast and together.

In other words, the race for the vaccines was an achievement that deserves a proportionate response from policymakers.

Indeed, we are not only talking about domestic policy—individual governments have done their best on their own this year to control the virus and its economic effects. Many, for example, have taken extraordinary fiscal and monetary measures by ways of stimulus in order to respond effectively to the needs of people.

But unilateral action will never be enough. Vaccines are made up of over 280 materials and components produced by many suppliers in 19 locations around the world. If they are to be produced quickly and distributed to all economies as needed, and administered equitably within each one, we need flexibility and innovation in how we cooperate with each other.

When leaders of the 21 members of the Asia-Pacific Economic Cooperation (APEC) forum met through video call on 16 July, it was precisely what the doctor ordered, and a promising sign of the region rallying against the virus.

No one would doubt the priority of every government today is COVID-19, which remains a health and economic crisis 19 months after it was declared by the World Health Organization. If last year was a swift shift into crisis mode after its sudden emergence, this year is marked by an understanding of how deadly the virus is, and how deeply it can damage our society and economy in the long term should we not take collective action. The APEC Chair, New Zealand Prime minister Jacinda Ardern, and the rest of the leaders decided that their collective attention to this crisis couldn’t wait until November.

For two and a half hours last Friday leaders conversed with representatives of the International Monetary Fund (IMF) and the World Health Organization (WHO) and engaged in a thriving dialogue amongst themselves, which covered three cardinal points.

First, leaders focused on tackling the health crisis by getting as many people inoculated as soon as possible, as well as strengthen health systems. APEC’s ministers have already agreed to speed up the flow of vaccines across borders. A reaffirmation of this from leaders, and agreement to move beyond vaccine nationalism, will light a fire under efforts to get vaccines to everyone. Without such commitments to get vaccines where they are needed, the extraordinary science that produced the vaccines would have been wasted. As Dr Michael Ryan of the WHO health emergencies program puts it when asked what are the three most important things for epidemic preparedness and response: “governance, governance and governance,” and that's coming from an epidemiologist.

Second, leaders discussed the challenge of sustaining economies through the crisis. Stimulus measures must continue to sustain jobs and businesses, markets be kept open, and confidence amongst economies kept strong. In part, this requires relying on and supporting institutions like the World Trade Organization that offer much needed predictability through trade rules. Once on stable ground, the Asia-Pacific—one of the most productive and dynamic regions in the world—can innovate its way to recovery.

The third point of discussion was about the nature of the recovery. Leaders recognize that alongside catastrophe is opportunity. If economies make smart decisions in dealing with the immediate impacts of the pandemic, it is possible that the region emerges from this crisis as more inclusive and digitally enabled economies, with better infrastructure and prospects available to everyone regardless of age, race, gender, or economic and social standing. Equally important to leaders is learning from the past year to build resilience against future shocks by bolstering health systems as well as our mechanisms for trade.

Regional cooperation will have a key role in the rebuilding process. The COVID-19 pandemic has shown the importance of a coordinated and cooperative response to regional and global crises. APEC is especially well-placed to take a prominent role in this. It is deeply affected but also the best equipped to deal with the health crisis.

The 21 APEC members include the largest economies in the world as well as smaller economies, offering a uniquely diverse perspective going round the table. Many middle-income economies have excellent case studies for stemming the virus’s initial waves through sound domestic policy and well-planned agreements with other members. They have much to offer in policy coordination and the sharing of best practices.

At the same time some APEC economies are the world’s biggest exporters of vaccines, the distribution of which will be essential in stamping out further waves and paving the way to recovery.

Leaders have made it clear that no one will be safe unless everyone is safe. They have stated their commitments and have issued their orders. We have the unique opportunity this year to work quickly to achieve life-saving results by the time they meet again in November, which will set the tone for when Thailand hosts APEC in 2022.

Dr Rebecca Sta Maria is the executive director of the APEC Secretariat. A version of this article was originally published by the NZ Herald.