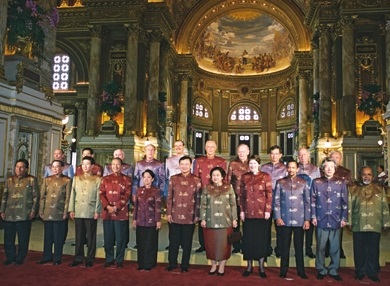 We gathered in Bangkok for the 11th APEC Economic Leaders’ Meeting to combine our perse strengths to meet the challenges facing our region. In line with APEC’s theme for this year, "A World of Differences: Partnership for the Future," and its sub-themes, following our interactive and meaningful exchange of views, we agreed that strong partnership is vital in order to achieve the goals we set out in Bogor. To realize our vision amidst the rapidly changing international environment, we agreed to strengthen our partnership not only to liberalize and facilitate regional trade and investment, but also to protect our peoples and societies against threats to their security, while preparing them to benefit fully from free and open trade. By taking these steps, we can realize the APEC vision, established by Leaders in 1993, of "achieving stability, security and prosperity for our peoples."

We reaffirmed the primacy of the multilateral trading system, and agreed that the Doha Development Agenda (DDA) offers the potential for real gains for all economies, particularly developing economies, in the areas of agricultural reform, improved market access for goods and services, and clarification and improvement of trade disciplines. We lent our strong support for continuing the valuable work done at the Cancun Ministerial Conference to advance the DDA. We agreed that for global free trade to flourish, regional and bilateral free trade agreements must be consistent with WTO principles, advance WTO objectives and contribute to the Bogor Goals.

To advance the DDA and the Bogor Goals of free and open trade and investment, as well as their supporting conditions, we agreed to:

We agreed that transnational terrorism and the proliferation of weapons of mass destruction pose direct and profound challenges to APEC’s vision of free, open and prosperous economies. We agreed to dedicate APEC not only to advancing the prosperity of our economies, but also to the complementary mission of ensuring the security of our people.

We therefore committed at Bangkok to take all essential actions to:

We pledged to discuss at each Leaders’ Meeting our progress toward these security commitments, and to take specific actions in pursuit of them.

We agreed this year to:

3. Using APEC to Help People and Societies Benefit from Globalization

Sustainable economic development requires empowering people and strengthening societies for globalization. In this regard, we welcomed efforts to increase APEC's contribution to this process by: making it more effective; better focusing and strengthening its work on economic and technical cooperation; and increasing its interaction with international financial institutions, the private sector, and other outside organizations. This will make APEC’s work more effective in bridging the gap between developed and developing economies.

To create the conditions that allow peoples and societies to make the most of their potential and prepare for the challenges of the future, we agreed to:

We endorsed in full the conclusions of and the Joint Statement agreed by Ministers at the Fifteenth APEC Ministerial Meeting.