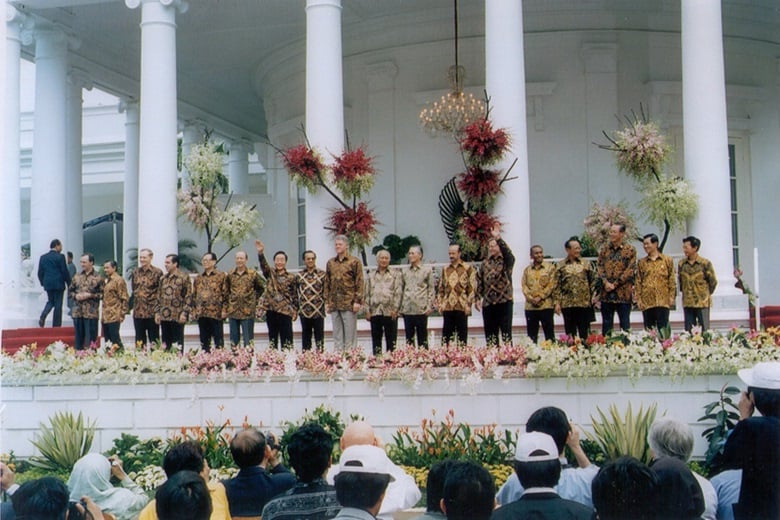 1. We, the economic leaders of APEC, came together at Bogor, Indonesia today to chart the future course of our economic cooperation which will enhance the prospects of an accelerated, balanced and equitable economic growth not only in the Asia-Pacific region, but throughout the world as well.

2. A year ago on Blake Island in Seattle, USA, we recognized that our diverse economies are becoming more interdependent and are moving toward a community of Asia-Pacific economies. We have issued a vision statement in which we pledged:

4. As we approach the twenty-first century, APEC needs to reinforce economic cooperation in the Asia-Pacific region on the basis on equal partnership, shared responsibility, mutual respect, common interest, and common benefit, with the objective of APEC leading the way in:

We are pleased to note the significant contribution APEC made in bringing about a successful conclusion of the Uruguay Round. We agree to carry out our Uruguay Round commitments fully and without delay and call on all participants in the Uruguay Round to do the same.

To strengthen the open multilateral trading system we decide to accelerate the implementation of our Uruguay Round commitments and to undertake work aimed at deepening and broadening the outcome of the Uruguay Round. We also commit ourselves to our continuing process of unilateral trade and investment liberalization. As evidence of our commitment to the open multilateral trading system we further agree to a standstill under which we will endeavor to refrain from using measures which would have the effect of increasing levels of protection.

We call for the successful launching of the World Trade Organization (WTO). Full and active participation in and support of the WTO by all APEC economies is key to our ability to lead the way in strengthening the multilateral trading system. We call on all non-APEC members of the WTO to work together with APEC economies toward further multilateral liberalization.

7. To complement and support this substantial process of liberalization, we decide to expand and accelerate APEC'S trade and investment facilitation programs. This will promote further the flow of goods, services, and capital among APEC economies by eliminating administrative and other impediments to trade and investment.

In particular we ask our ministers and officials to submit proposals on APEC arrangements on customs, standards, investment principles and administrative barriers to market access.

To facilitate regional investment flows and to strengthen APEC's dialogue on economic policy issues, we agree to continue the valuable consultations on economic growth strategies, regional capital flows and other macro-economic issues.

8. Our objective to intensify development cooperation among the community of Asia-Pacific economies will enable us to develop more effectively the human and natural resources of the Asia-Pacific region so as to attain sustainable growth and equitable development of APEC economies, while reducing economic disparities among them, and improving the economic and social well-being of our people. Such efforts will also facilitate the growth of trade and investment in the Asia-Pacific region.

Cooperative programs in this area cover expanded human resource development (such as education and training and especially improving management and technical skills), the development of APEC study centers, cooperation in science and technology (including technology transfer), measures aimed at promoting small and medium scale enterprises and steps to improve economic infrastructure, such as energy, transportation, information, telecommunications and tourism, with the aim of contributing to sustainable development.

9. In order to facilitate and accelerate our cooperation, we agree that APEC economies that are ready to initiate and implement a cooperative arrangement may proceed to do so while those that are not yet ready to participate may join at a later date.

Trade and other economic disputes among APEC economies have negative implications for the implementation of agreed cooperative arrangements as well as for the spirit of cooperating. To assist in resolving such disputes and in avoiding its recurrence, we agree to examine the possibility of a voluntary consultative dispute mediation service, to supplement the WTO dispute settlement mechanism, which should continue to be the primary channel for resolving disputes.

10. Our goal is an ambitious one. But we are determined to demonstrate APEC's leadership in fostering further global trade and investment liberalization. Our goal entails a multiple year effort. We will start our concerted liberalization process form the very date of this statement.

We direct our ministers and officials to immediately begin preparing detailed proposals for implementing our present decisions. The proposals are to be submitted soon to the APEC economic leaders for their consideration and subsequent decisions. Such proposals should also address all impediments to achieving our goal. We ask ministers and officials to give serious consideration in their deliberations to the important recommendations contained in the reports of the Eminent Persons Group and the Pacific Business Forum.

11. We express our appreciation for the important and thoughtful recommendations contained in the reports of the Eminent Persons Groups and the Pacific Business Forum. The reports will be used as valuable points of reference in formulating policies in the cooperative framework of the community of Asia-Pacific economies. We agree to ask the two groups to continue with their activities to provide the APEC economic leaders with assessments of the progress of APEC and further recommendations for stepping up our cooperation.

We also ask the Eminent Persons Group and the Pacific Business Forum to review the interrelationships between APEC and the existing sub-regional arrangements (AFTA, ANZERTA and NAFTA) and to examine possible options to prevent obstacles to each other and to promote consistency in their relations.