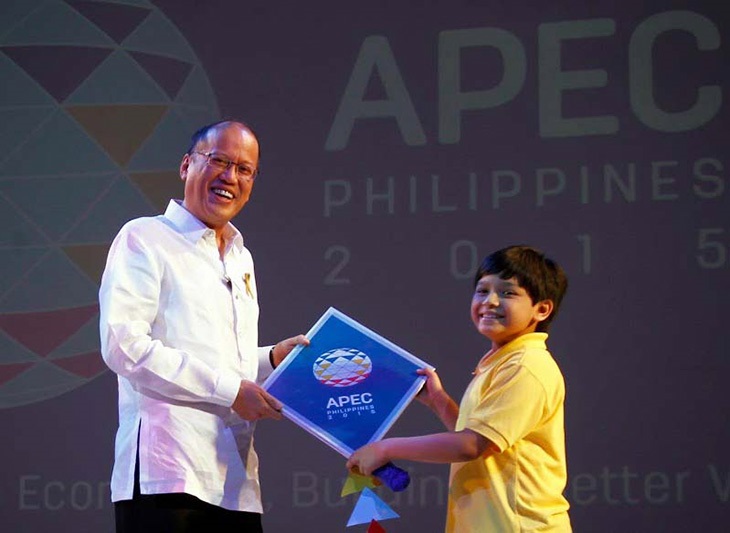 The Philippines is intent on building on the significant breakthroughs in trade and economic sustainability achieved by APEC member economies this year in China and ensuring that the benefits are widely felt, said President Benigno Aquino III on the eve of the archipelago’s commencement as APEC 2015 Chair.

Establishing a more inclusive economic environment across the Asia-Pacific will be the focus of collaboration in APEC over the coming year, revealed President Aquino in a kick-off speech in Manila on Monday evening. It set the tone for the APEC Informal Senior Officials’ Meeting on 8-9 December in Legazpi City, Albay that will mark the first assembly of member economies as part of APEC Philippines 2015 and decide their agenda priorities.

“One week from now, we’ll be demonstrating a thousand per cent effort – the first visitors for APEC 2015 will set foot in our country, and the Philippines will have the distinct privilege of hosting the next chapter in one of the largest joint efforts to improve trade and cooperation amongst major economies,” said President Aquino. “Here, within our communities, leaders from government and the private sector will map out the future of the Asia-Pacific.”

“This gathering’s significance is magnified when one considers that, in a world where many economies are reeling from uncertainty, Asia-Pacific economies have, for the large part, sustained a relatively good level of growth,” he explained. “It is for this reason that the Philippines has chosen to orient this year’s APEC towards making certain that this growth has tangible effects on the lives of all our peoples.”

The APEC Informal Senior Officials’ Meeting, or ISOM, will be led by Philippine Foreign Affairs Undersecretary Laura Q. Del Rosario, Chair of the 2015 APEC Senior Officials’ Meeting. Together, Senior Officials will create a plan for action during the Philippines’ year as Chair, in line with the theme, “building inclusive economies, building a better world,” and taking into account the region’s ground-breaking achievements in 2014 to advance regional integration, economic reform and innovative development, and infrastructure investment and comprehensive connectivity.

Measures promoting more integrated, inclusive economies have supported average GDP growth of 6.3 per cent between 2010 and 2013 and 5.8 per cent over the first three quarters of this year for the Philippines, uplifting its 100 million people, President Aquino noted. “This is inclusive growth: where economic progress enables the betterment of our peoples and where those empowered peoples can open the doors wider to even greater progress, spurring a virtuous cycle of empowerment and continuous development,” he exhorted.

Initiating a two-year collective strategic study for realizing a Free Trade Area of the Asia-Pacific, or FTAAP, will be in view, as called for by President Aquino and his fellow APEC Leaders in Beijing. Other issues will include finalizing expansion of the Information Technology Agreement under the World Trade Organization to make next generation products more accessible, to more people, following the resolution of an 18-month impasse, as well as meeting several APEC deadlines critical to bolstering economies, job creation, wages and sustainability in the region.

Member economies will angle to reduce tariffs on 54 “environmental goods” to 5 percent or less by the end of 2015 to enhance trade and green growth, on the heels of the new target to double renewable energy in the region by within 15 years and landmark bilateral China-US emissions deal. Improving the ease of doing business by 25 per cent by the end of 2015, a goal set in 2009, will also be on the table, supported by a new APEC anti-corruption network and stepped up efforts to address barriers to starting a business and boost financing to credit-worthy firms.

Achieving a 10 per cent improvement in supply chain performance in the region, based on time, cost and certainty, will be an added focus. Measures in a newly endorsed APEC Connectivity Blueprint as well as continued progress towards the adoption of the Trade Facilitation Agreement after unexpected implementation challenges among WTO members were addressed promote this objective, likewise set in motion in 2009. Emphasis is on further easing bottlenecks to increasing goods, services, people and capital flows, at and behind borders.

“As the clamor for progress that leaves no one behind resounds the world over, the Philippines has the opportunity to set a global example of inclusivity this year,” concluded President Aquino, in reference to the archipelago’s role as 2015 APEC Chair—the second time it will guide collaboration between member economies in this capacity following a 19-year interval. “We are rising, and will continue to rise to that challenge.”

See video of President Aquino’s remarks on inclusive growth at the APEC CEO Summit, prior to the APEC Leaders’ Meeting in Beijing, at this link.