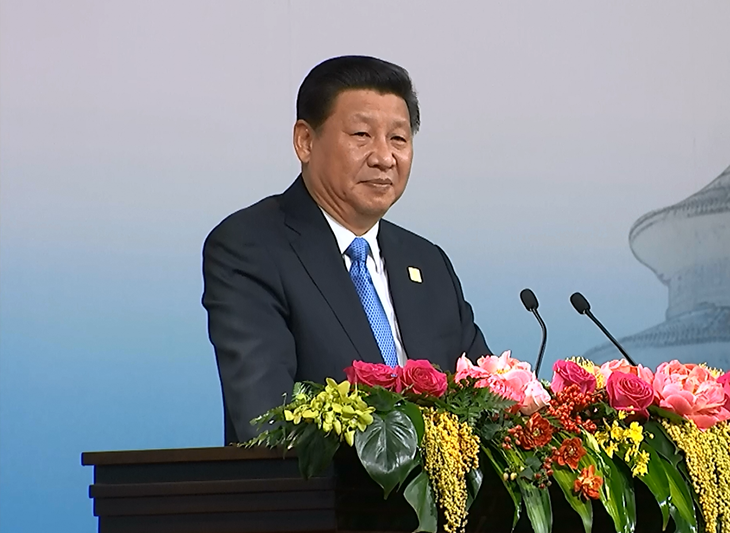 China’s President Xi Jinping laid out an ambitious agenda for moving the Asia-Pacific through a “new development stage” in remarks delivered to the business community on the eve of the APEC Economic Leaders’ Meeting in Beijing.

President Xi, who is the Chair of APEC in 2014, detailed the priorities that the Leaders of the 21 member economies will take forward when they assemble on Monday and Tuesday. He cautioned that inaction could leave the region and the entire global economy in a damaging state of flux.

“The Asia-Pacific stands at a crossroads,” declared President Xi in a keynote address at the opening of the 2014 APEC CEO Summit. “The increasingly close connection between Asia-Pacific economies has made regional economic integration all the more necessary and urgent.”

“The impacts of the international financial crisis linger and recovery in some economies remains fragile,” he added. “The Asia-Pacific has the daunting tasks of raising equality and efficiency of economy and in replacing old growth areas with new ones.”

Initiatives being pursued include a roadmap for the realization of a Free Trade Area of the Asia-Pacific, or FTAAP—a comprehensive free trade agreement to build on on-going regional undertakings such as the Regional Comprehensive Economic Partnership and Trans Pacific Partnership.

“We need to jointly build an open economy in the Asia-Pacific,” asserted President Xi. “Openness brings progress while closed door policy leads to backwardness. Opening up has been an important prerequisite for the Asia-Pacific to grow and will remain so in the future.”

“It means greater openness within our respective economies to give full scope to labor, knowhow, technology, management and capital,” he explained. “It also means opening up to each other so that diversity and variety of member economies can be turned into potential and a driver for development.”

Leaders will further consider a strategic blueprint on promoting global value chain development and cooperation, as well as a new APEC Accord on Innovative Development, Economic Reform and Growth to foster more sustainable, inclusive economies. The first-ever APEC Connectivity Blueprint is also on the table.

“Connectivity and infrastructure building in the Asia-Pacific is not only a necessity for achieving regional economic integration but more importantly it bears on the long-term development of all economies,” President Xi said. “We should work together to bring about connectivity covering both sides of the Pacific.”

“China and the other APEC members are looking forward to reaping a harvest at the 22nd APEC Economic Leaders’ Meeting,” President Xi concluded. “The development prospect of our region hinges on the decisions and actions we take today.”

The APEC CEO Summit, an open dialogue between Leaders and business heads that is organized by the private sector, will continue on Monday. It will overlap with the start of the two-day APEC Economic Leaders’ Meeting.