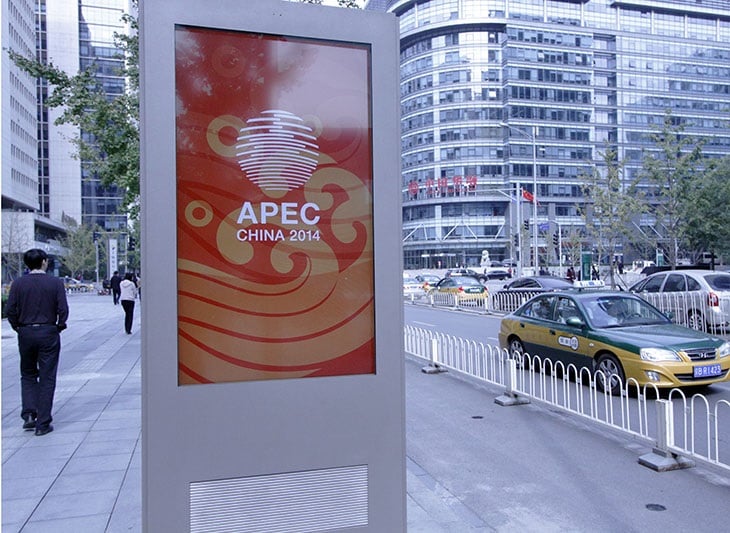 Program details for the 2014 APEC Economic Leaders’ Week, to be hosted in Beijing by China and chaired by President Xi Jinping, have been announced.

Coinciding with the 25th anniversary of APEC’s founding to boost trade, investment and sustainable growth across the Pacific, Leaders’ Week will bring together the Leaders, Ministers and Senior Officials of the 21 APEC member economies to unlock new growth vital to global recovery and long-term prosperity. Priorities will include:

See the new APEC 25th anniversary video featuring current and former APEC Leaders and Ministers for more on how member economies are building on the region’s progress.

Hosted by China Foreign Affairs Minister Wang Yi and Commerce Minister Gao Hucheng, and including both the Foreign Affairs and Trade Ministers from the other 20 APEC economies, the meeting will decide the contours of joint policy development and implementation moving forward.

An open dialogue held in conjunction with the APEC Economic Leaders’ Week and organized by the private sector featuring the region’s Leaders and business heads.

Chaired by China President Xi Jinping and including the Leaders of the other 20 APEC economies, the meeting will provide strategic vision and directives for future collaboration.

All media must be accredited to access to the meeting venues and facilities.

Questions related to media accreditation, technical issues and associated arrangements should be directed to:  [email protected]

Questions related to media events and schedules should be directed to:  [email protected]