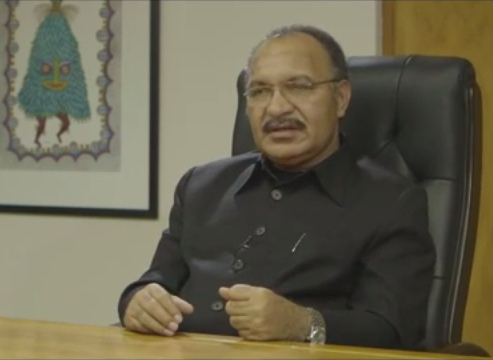 Papua New Guinea is deepening its engagement within APEC to strengthen its trade and investment linkages with larger members and further bridge the region with the South Pacific which Prime Minister Peter O’Neill says are key to greater sustainable growth.

The Prime Minister shared his views on the development of Papua New Guinea’s economy and regional partnership in an interview in Port Moresby. This included his vision for building on Papua New Guinea’s 20 years of APEC membership so that the benefits of open, integrated markets are felt by more people.

“Our focus is to continue to increase trading opportunities for [Papua New Guinea],” said O’Neill, pointing to its expanding, export-focused oil and gas, mining, agriculture, fisheries and forestry sectors. “We don’t want any subsidies, we don’t want any other tax incentives that they offer for certain industries but having access to the markets is more important to us than anything else.”

“Being a member of the APEC community gives a lot of opportunities for Papua New Guinea to link the Pacific into many of the established economies around the world,” Prime Minister O’Neill added. “What we are trying to do is to make sure that we link up these smaller economies to ours so that they can take advantage of some of the trading arrangements that we have.”

Papua New Guinea, whose top ten trading partners last year included nine APEC economies led by Australia, Japan, China, Singapore, Malaysia and the United States, projects some 6.2 percent growth in 2014. This is down from around 7.5 percent in the last five years, yet ahead of the International Monetary Fund’s 5.5 percent growth forecast for Papua New Guinea in 2013.

Per capita gross domestic product among Papua New Guinea’s seven million people, half of which are under 25 and account for over 80 percent of all Pacific islanders, has also increased ten years in a row. Addressing the effects of economic transition is now a central focus.

Prime Minister O’Neill said that it is important that APEC members work to further raise living standards and address the unique challenges facing Pacific islands which Papua New Guinea plays a special role in representing on account of its size. These include fast-growing populations and the effects of climate change on small island communities.

“One way to do [it] is by trade and investment—making sure that our businesses are prospering in those areas [and] they have access to the markets that the bigger [economies] have so that they can export some of their produce and the resources that they have,” Prime Minister O’Neill explained.

Papua New Guinea was recently named co-chair of the APEC Investment Experts’ Group. Advancing member economies’ new Multi-Year Plan for Infrastructure Development and Investment to support cheaper, more efficient, reliable and inclusive supply chains will be the subject of attention within the group in 2014.

The Prime Minister noted that infrastructure and urban construction are priorities which Papua New Guinea looks to coordinate “more meaningfully” on with regional partners. Security and best practice sharing in sectors such as agriculture and tourism are additional points of interest.

The goal is to improve the business environment to attract foreign direct investment, create opportunities for small businesses and young entrepreneurs, and spur job creation. This is in-line with Papua New Guinea’s agenda for bringing APEC economies closer together.

Video 5: Planning for the road ahead in APEC

“We’ve got a lot more to offer,” Prime Minister O’Neill concluded. “The size of the economy may be small but in terms of potential it is quite enormous.”

To view the photo journal of the interview with Prime Minister O’Neill, please click here or visit the following URL: http://www.apec.org/Press/Photos/2013/20131227_PNG.aspx

Technology Adoption and Integration is the Lever to Move Up the Value Chain: Report