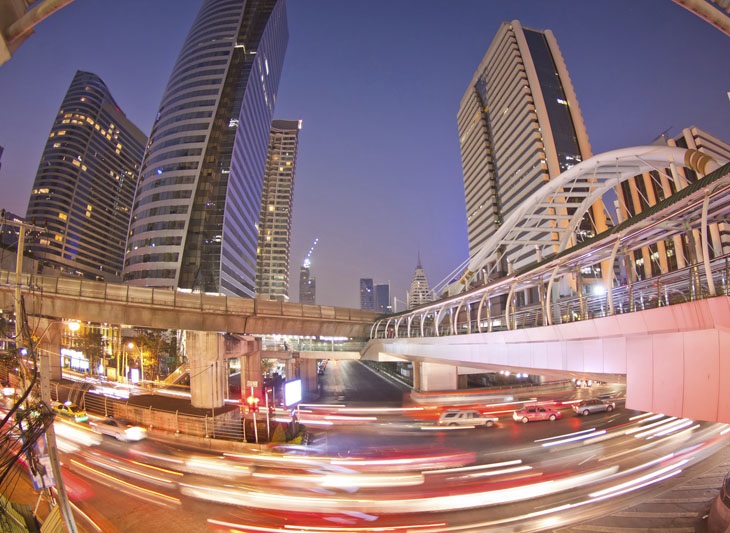 We are the first research team to develop a mathematical technique called Stochastic Cell Transmission Modelling (SCTM) to create a real-time, intelligent traffic-management systems that works.

Commute times in some of Asia’s most congested cities look set to drop, following a breakthrough in traffic prediction modelling, trialled in Bangkok and recognised at this year’s APEC ASPIRE Science Award. Dr Agachai Sumalee, a scientist at the Hong Kong Polytechnic University and King Mongkut’s Institute of Technology, Thailand, won the USD 25,000 ASPIRE prize after successfully combining traffic-flow algorithms with highway sensors to create an intelligent transportation system that reduces highway congestion.

“The problems we are facing are becoming more and more similar,” he said. “I hope this award inspires other scientists to collaborate across borders, and accelerate the process of turning research into practical technology.”

The annual APEC Science Award for Innovation, Research and Education (ASPIRE) is organised by the APEC Policy Partnership on Science, Technology and Innovation (PPSTI) and sponsored by two global science publishing companies, Elsevier and Wiley. It is awarded to scientists aged under 40, in recognition of research that strengthens science and technology networks within the Asia-Pacific region and promotes sustainable economic growth.

The award was based on an independent assessment that estimated Dr Sumalee’s transportation system resulted in a net economic benefit of USD 1 million over a one-year period, when trialled on a 17-mile stretch of Bangkok expressway.

APEC host economy, China, made ‘Intelligent Transportation’ the official theme for the 2014 APEC prize to stimulate academic thinking on two major challenges faced by rapidly urbanising APEC economies—congestion and pollution. According to the Asia Development Bank (ADB), road congestion already costs Asian economies an estimated 2–5 per cent of GDP per year in lost time and higher costs. The ADB estimates that up to 80 per cent of city air pollution is attributed to transport.

Besides Dr Sumalee, this year’s ASPIRE prize received nominations from many other prominent researchers in the region innovating new intelligent transportation solutions. These included, Dr Chris Manzie of Melbourne University, who is working with Ford and Toyota, to optimise the mix of low-emission fuels in next-generation car engines.

This year’s winner, Dr Sumalee, has pioneered the use of a stochastic mathematical model to help highway managers predict traffic conditions and prevent congestion from building up after a traffic incident occurs.

“Stochastic models deal with probabilities, and enable us to calculate an outcome when there is a change to a normal sequence of events,” explained Dr Sumalee. “Predictive mathematics is relevant to highway traffic management because it helps us analyse the minor events that lead to major delays.”

Dr Sumalee started work on stochastic mathematics as a PhD student at Leeds University in the United Kingdom from 1999 to 2006, before accepting his current position as Associate Professor at the Hong Kong Polytechnic University. In 2011, he began working on traffic modelling at King Mongkut’s Institute of Technology Ladkrabang (KMITL) in collaboration with the Expressway Authority of Thailand in what Dr Sumalee describes as a public-private-university partnership. Today, he also serves as Director of the Smart City Research Center at KMITL.

“The first step was to build models for a 30 kilometre stretch of expressway surrounding Bangkok, which provided us with real-time traffic-prediction intelligence,” said Dr Sumalee. “Next, we installed remote microwave sensors along the highway that detect any deviation from normal flow. That data is fed into our models to predict what traffic will look ten minutes after a deviation in normal traffic is detected.”

To enable traffic managers to select the optimal response, Dr Sumalee’s traffic management system runs several scenario analyses that predict the impact on traffic for a range of responses, such as closing on-ramps or switching lane directions.

“With precise mathematical predictions, the traffic manager at the Express Authority of Thailand can choose the decision most likely to minimise congestion,” he said. “We have also integrated the system with a mobile app that warns drivers of upcoming congestion, and suggests alternative routes.”

The system is now being evaluated by the Department of Highways to help manage traffic on the 134 kilometre highway between Bangkok and Pattaya.

“With my former PhD student, Renxin Zhong, now working in traffic modelling at Sun Yat-sen University, I am hopeful the next application will be in China,” said Dr Sumalee.

Cross-border collaboration also featured strongly in the work of Australian nominee, Associate Professor Chris Manzie of the University of Melbourne. Dr Manzie led a team of up to 25 academics drawn from multiple research institutions in Australia, U.S. and Korea. The team focused on addressing one of the principal barriers to using alternative fuels in car engines: the variation in fuel composition.

“With compressed natural gas, biofuels, and liquefied petroleum, there is typically a wider variation in the fuel composition as compared with traditional petrol or gasoline,” said Dr Manzie. “This makes it extremely difficult for engine designers to create an engine that burns fuel cleanly all the time.”

“By designing engine controllers that dynamically compensate for a divergence in fuel composition, vehicles running on alternative fuels can run at close to optimal efficiency with lower tailpipe emissions. Our work with Ford and Toyota over a number of years helped develop these types of controllers and calibration approaches. The end results will be lower vehicle running costs, especially in traffic, hopefully starting with the next generation of road vehicles.”

The ASPIRE prize is the result of five years of co-sponsorship by publishers, Elsevier and Wiley, who are working with APEC to increase public and government support for practical research.

“Because of our position as global science research publishers, we understand how important knowledge creation is to economic growth,” said Dr Brad Fenwick, Senior Vice President for Global Strategic Alliances at Elsevier. “The ASPIRE prize targets early-career researchers because they display an innate confidence in the ability of science to solve societal problems.”

ASPIRE’s other co-sponsor, Wiley, publishes over 1500 scholarly titles, and has published the works of 450 Nobel Prize winners. Its Senior Director for Global Government Affairs, Andrew Tein, stressed the primacy of international collaboration to the APEC region.

“The future of science is undoubtedly cross-border and interdisciplinary—and that’s the spirit of APEC,” he says. “This year’s focus on intelligent transport systems showcased practical ideas that will help economies enhance their productivity and improve people’s quality of life. By rewarding international scientific collaboration, we foster the spirit that these are collective challenges that can be solved by scientists working across borders.”

For more information on the APEC ASPIRE Prize and previous winners, click here.