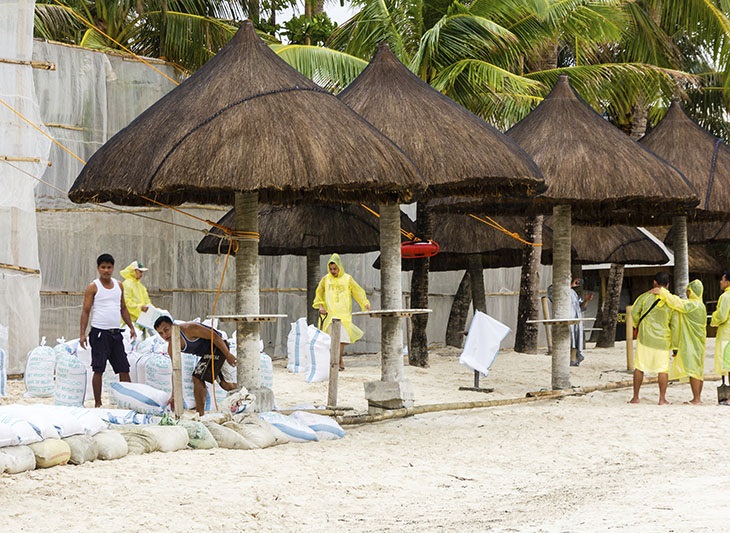 In the wake of Typhoon Haiyan, small and medium-sized businesses in the Philippines from farms to fisheries were impacted by the devastation. Many coconut farms, a key export for the Philippines, were flattened. Amid the wreckage of flooded crops and broken boats, small business owners struggled to rebuild their livelihoods.

“Typhoon Haiyan hit many micro, small and medium-sized businesses (SMEs) hard, seriously affecting lives, livelihoods and communities,” said Ray Chambers, the United Nations Special Envoy for Financing the Health Millennium Development Goals and for Malaria. “In the Philippines, SMEs provide a living for 65 per cent of the labor force, and as such, they play an essential role in a region’s recovery.”

In the aftermath of Typhoon Haiyan, SMEs suffered from delays in operation, losses in inventories and decline in sales. Overall damages to the economy are estimated to be around 15 percent of the Philippines’ GDP in 2013, explained Professor Salvador P. Catelo, College of Economics and Management, University of the Philippines Los Banos, who is actively involved in an APEC project to ensure SME disaster resilience.

“Back in 2011, large-scale emergencies in the region from the earthquake and tsunami in Japan to the floods in Thailand put the vulnerability of SMEs and entrepreneurs into greater focus on the APEC agenda,” said Dr Wimonkan Kosumas, Chair of the APEC Small and Medium Enterprises (SME) Working Group.

“As a result, APEC launched a multi-year project in 2011 to assist SMEs with business continuity planning to strengthen their ability to endure natural disasters,” added Dr Kosumas.

The APEC project is addressing this issue by enhancing the capacity of SMEs to better prepare for disasters and to ensure minimal and tolerable disruption to business operations and supply chains.

For example, as a result of the earthquake and tsunami that struck Japan in March 2011, 90 per cent of surveyed small businesses went bankrupt due to damage to production and supply chain disruption, according to the Asian Disaster Reduction Center. The 2011 floods in Thailand affected 557,637 SMEs and 2.3 million workers lost their jobs, according to the Office of Small and Medium Enterprises Promotion in Thailand.

Moreover, global supply chains were disrupted. For example, the SME manufacturer of a pearl-lustre pigment that makes car paint sparkle was temporarily shut down by the 2011 Japan earthquake and tsunami. This closure impacted the world’s major auto companies including Toyota, Nissan, Ford, Chrysler, Volkswagen and General Motors as they scrambled to identify another supplier.

“The challenges that SMEs face in disasters can destabilise entire industries. And yet, many SMEs lack any disaster planning,” said Dr Li Wei-Sen, Co-Chair of the APEC Emergency Preparedness Working Group, co-sponsoring the project.

“In a survey of businesses in 17 APEC economies, 67 percent of companies, large and small, said they did not know about business continuity planning. Among small and medium enterprises, this figure jumped to 83 percent,” Dr Li added.

SMEs lack the capacity to cope with natural disasters due to limited resources, expertise and awareness. “The main goal of the APEC project is to promote SMEs to establish business continuity plans (BCPs) for sustainable global supply chains,” said Johnny Yeh, Executive Director of the APEC SME Crisis Management Center in Chinese Taipei, who is overseeing the APEC project.

“This is accomplished by training related government, non-profit and private sector organizations in APEC member economies, so they, in turn can train SMEs in their respective economies,” Mr Yeh added.

As part of the project, experts have developed a simple step-by-step APEC Business Continuity Planning Guidebook for SMEs.

“A key element of a business continuity plan is to be able to resume disrupted operations as quickly as possible,” added Mr Okabe. “This could involve a contingency plan to relocate operations to a safer venue.”

“We set up our business continuity plan with counselling from the Small and Medium Enterprise Administration in Chinese Taipei,” said CEO Frank Ni of Chiao Fu Group. “The APEC project was very helpful for us.  The guidebook provided charts and tables that led us along the process of drawing up our own business continuity plan.”

As part of its business continuity planning, Chiao Fu assessed potential risks and developed recovery protocols for different scenarios. For example, if there was a disruption in Thailand, Chiao Fu has made arrangements to immediately produce and ship from their Taichung factory in Chinese Taipei.

Companies like Chiao Fu are using the APEC Business Continuity Planning Guidebook to help strengthen their business continuity management system. However, challenges remain for the company to feel confident in a disaster.

“Because we don’t have many experiences with natural disasters, we still worry we will be under-prepared,” explained Mr Ni. “For example, in the scenario of a broken supply chain, we plan to increase the quantity of raw material in our safety stock for sole source suppliers and look for replacement suppliers.”

“However, as we have no experience in such circumstance, we are unsure if the level of our safety stock would be sufficient or if our replacement supplier will be exempted from the disaster,” he added.

APEC is addressing these and other issues. To continue efforts accomplished in the first “Train-the-trainer” workshop in Chinese Taipei in 2012, SME training workshops are planned in other APEC member economies throughout the region.

In addition, the APEC project conducted a joint study with Australia, Japan, New Zealand, Philippines, Thailand and the United States to investigate the needs of SMEs in responding to natural disasters and to highlight best practices, which will be published later this year.