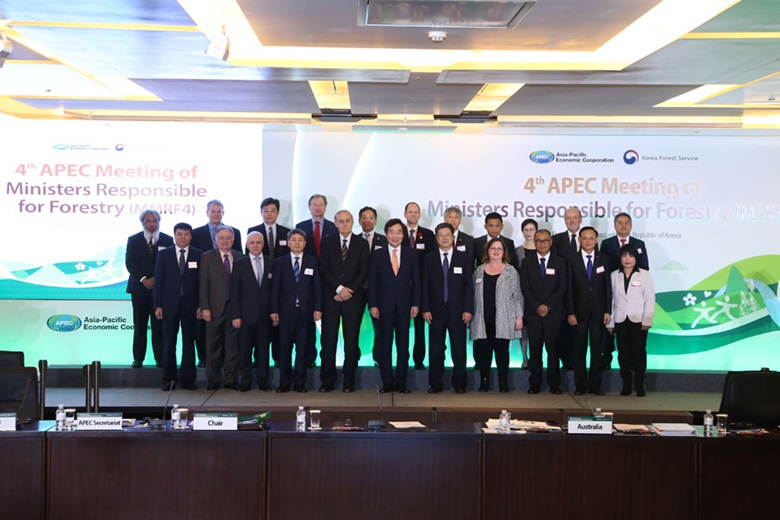 “The Seoul Statement of the MMRF4”

We, the Ministers and Senior Officials attending the Fourth APEC Meeting of Ministers Responsible for Forestry (MMRF4) in Seoul, the Republic of Korea, on 30-31 October 2017:

Building upon the achievements of and continuing the momentum of the First MMRF in Beijing, China (2011), the Second MMRF in Cusco, Peru (2013), and the Third MMRF in Port Moresby, Papua New Guinea (2015) and recognizing the economies who have supported and volunteered to host these events;

Acknowledging the 2017 APEC theme of “Creating New Dynamism, Fostering a Shared Future” and reaffirming the importance of forests in achieving APEC’s goal of supporting sustainable economic growth and prosperity in the Asia-Pacific region;

Noting the recognition given by APEC Leaders of the important role that forests play in terms of environmental, economic, and social development as well as climate change mitigation and adaptation;

Recognizing the importance of achieving and assessing, in due course, the aspirational goal of increasing forest cover in the region by at least 20 million hectares by 2020 as set out in the 2007 APEC Sydney Declaration;

Recalling the need for a concerted effort by all APEC economies to accomplish the Sydney forest goal, and recognizing that sustainable forest management of all types of forests plays a crucial role in the achievement of the UN Sustainable Development Goals (SDGs);

Reaffirming that sustainable forest management and forest-based industries are critical in providing income and employment opportunities, especially for forest-dependent communities, and recognizing that forests play an important role in enhancing livelihoods and the well-being of people in member economies;

Further recognizing the need for cooperation and proactive discussion, including high-level policy dialogues among APEC economies, to maximize the contributions of forests to the economic, environmental and social development of the region, we aspire to: