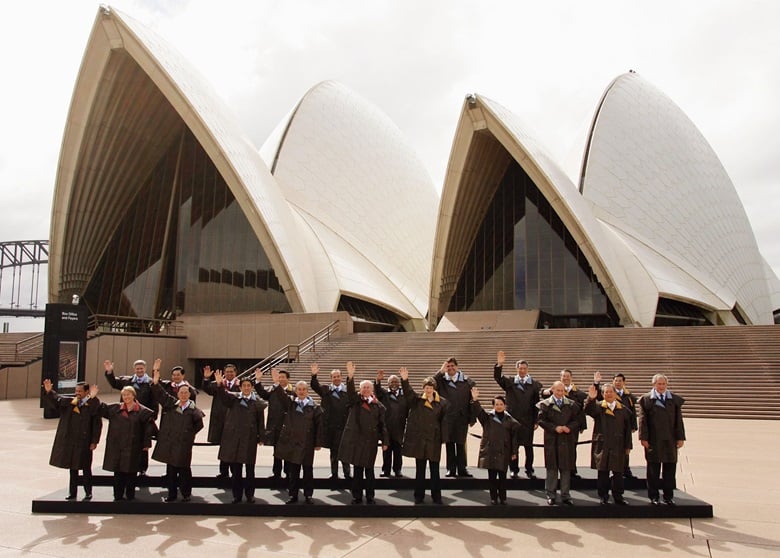 We, the Leaders of the Asia-Pacific Economic Cooperation (APEC) forum, gathered in Sydney, Australia on 8-9 September 2007. Recalling that APEC was established in Australia in 1989, we reflected with great satisfaction on the strong economic performance of the region since that time. We agreed that our collective commitment to regional economic integration, to free and open markets and to the security of our people has contributed substantially to the strength of our economies and the significant improvement in the welfare and prosperity of our people.

2. Promoting open, efficient, transparent and flexible economies is vital to continuing economic growth and the building of a strong and sustainable future for our Asia-Pacific community. This provides the best protection against economic volatility and disruption caused by natural disasters and other threats to sustainable growth. Each of us has agreed to play our part to support long-term prosperity. We will demonstrate strong leadership in pursuit of this objective in order to further improve the lives of our people. We have instructed Ministers to give new momentum to work in APEC in support of structural economic reform in member economies.

3. We are confident that robust economic growth will continue and that we can make further progress in our goal to reduce poverty and increase living standards. We will remain alert and responsive to developments and circumstances that might impact directly on the attainment of our goal.

4. We addressed the challenges of climate change, energy security and clean development. Our resolve on this issue is outlined in a separate statement issued at this meeting.

Primacy of the Multilateral Trading System

5. The Doha Round of World Trade Organization (WTO) negotiations is at a critical juncture. Open markets generate prosperity and development. Expansion of trading opportunities contributes to economic growth and higher living standards. APEC economies account for almost fifty per cent of world trade, and we are, therefore, all major stakeholders in a strong, expanding rules-based multilateral trade system.

6. Reflecting both the critical juncture faced by the WTO Doha Round, and our continued resolve to achieve a successful conclusion in these negotiations so important to each of our economies, we have issued a separate statement setting out the urgent need for progress and pledging our commitment to work with renewed energy to deliver an ambitious and balanced result.

7. APEC economies' commitment to open markets and economic cooperation has generated substantial regional integration. We have all benefited. Economic growth in the region has outstripped the rest of the world and the number of people living in poverty in the region has halved since 1989.

8. We welcomed and endorsed a report from our Ministers on ways to promote further economic integration in the Asia-Pacific region. We have agreed to accelerate efforts towards this objective by:

9. We have asked Ministers and officials to carry forward this work and report back to us in 2008 with a summary of steps taken to promote regional economic integration.

10. A successful conclusion to the Doha Round remains our primary trade priority. Regional and bilateral free trade arrangements also play a valuable role in accelerating trade and investment liberalisation and in bringing our economies closer together.

11. We took note of the views of the APEC Business Advisory Council on the importance of enhancing the convergence of trade agreements in the region.

12. Through a range of practical and incremental steps, we will examine the options and prospects for a Free Trade Area of the Asia-Pacific (FTAAP).

Improving economic efficiency and the business environment, including a new emphasis on structural reform

13. We have taken note of the views of our business leaders on the impact of global production networks and the integration of regional markets on business risks, costs and competitiveness. Regional economic integration requires not only enhanced trade and investment liberalisation and facilitation but also greater attention to 'behind-the-border' issues that impact on trade and commerce. We pledge to provide individual and collective leadership to improve the business environment by addressing these issues. In that regard, we

14. We are repeatedly reminded of our region's vulnerability to natural disasters and the devastating human and economic costs arising from threats to human security. We recognised that we all face new risks and challenges to people and economies - including from the potential spread across borders of terrorism, pandemics, illicit drugs and contaminated products, and the consequences of natural disasters. We affirmed that human security is essential to economic growth and prosperity.

15. We resolved to enhance our cooperation on challenges to human security and in so doing to remain closely attuned to the needs of business. We reaffirmed our commitment to dismantle terrorist groups, eliminate the danger posed by the proliferation of weapons of mass destruction and to protect our economic and financial systems from abuse by terrorist groups. We welcomed the ongoing development of APEC's trade recovery programme to facilitate trade recovery after a terrorist attack and encouraged economies to undertake pilot projects. We endorsed APEC's voluntary Food Defence Principles to help protect the food supply against deliberate contamination. We instructed Ministers to work towards more consistent security measures that reduce transaction costs, and to enhance cooperation with the private sector.

16. We agreed on the need to further strengthen APEC's efforts to build community resilience and preparedness for emergencies and natural disasters. We welcomed APEC's work to address and prevent threats to the customs, maritime, aviation, and mass transit sectors as well as to enhance pandemic preparedness and our ability to fight infectious diseases, including HIV/AIDS. To that end, we endorsed the APEC guidelines to ensure that economies continue to function in times of pandemic and guidelines to help create a supportive environment in the workplace for workers living with HIV/AIDS. We agreed to support the sharing of influenza specimens in a timely manner and to promote transparent, fair and equitable access to vaccines and other benefits that derive from them.

17. We agreed on the need to develop a more robust approach to strengthening food and consumer product safety standards and practices in the region, using scientific risk-based approaches and without creating unnecessary impediments to trade. Additional capacity building in this area is a priority. We directed Ministers to undertake further work in this important area and report on progress.

18. We recognised the ongoing economic risks associated with high and volatile energy prices and affirmed that rising energy demand in the Asia-Pacific can best be met by expanded trade and investment to boost supply and greater efficiency in use. We agreed that energy security is best met through efficient energy markets, characterised by free and open trade, secure and transparent frameworks for investment, clear price signals, market transparency, effective governance and competition.

19. We are committed to ongoing efforts to strengthen APEC and to make it more efficient and responsive. We welcomed the decision by Ministers to increase substantially member contributions, the establishment of a new APEC Policy Support Unit and on the appointment of an Executive Director for a fixed term.

20. We particularly recognised the benefits that have flowed from sharing experiences among our perse economies and the provision of economic and technical assistance to assist in the implementation of APEC commitments. We expressed appreciation to those member economies providing voluntary contributions to fund a new Policy Support Unit and the increasing number of economies making contributions to APEC's capacity building programmes.

21. We discussed the issue of APEC membership and agreed it was important to manage the possible entry of new members in a manner that ensures that the momentum APEC has developed towards regional integration and open economies is enhanced. We agreed to revisit the issue of membership in 2010.

22. We welcomed the offer of the United States of America and the Russian Federation to host APEC in 2011 and 2012 respectively.

23. We endorsed in full the Joint Statement of Ministers at the 19th APEC Ministerial Meeting.

24. We welcomed the invitation from the President of Peru to meet again in Lima in 2008.