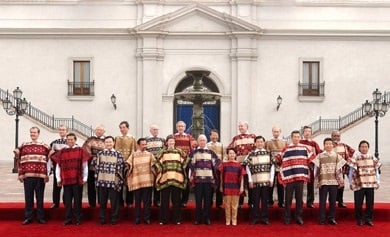 We gathered in Santiago for the 12th APEC Economic Leaders' Meeting, under APEC's 2004 theme, "One Community, Our Future". We reaffirmed our commitment to achieve sustainable and equitable growth and reduce economic disparities for the well-being of our people by meeting the Bogor Goals of trade and investment liberalization and facilitation, enhancing human security, and promoting good governance and a knowledge-based society.

We reaffirmed the primacy of the rules-based multilateral trading system, which allows us to pursue trade liberalization on a global scale. We welcomed the new momentum acquired by the Doha Development Agenda (DDA) negotiations resulting from the July Package adopted by the General Council of the World Trade Organization (WTO). We pledged to provide leadership to continue this momentum. With a view toward fulfilling the development objectives of the DDA, we agreed:

We call on all WTO Members to join us in this endeavor.

With regard to Regional Trading Arrangements and Free Trade Agreements (RTAs/FTAs), we agreed that they play a constructive role in accelerating liberalization in the region, thus contributing to the achievement of the Bogor Goals and advancing the WTO process. To strengthen this contribution and ensure high-standard agreements, we welcomed the APEC Best Practices for RTAs/FTAs which are a meaningful reference for APEC members when undertaking RTAs/FTAs negotiations. We also committed to greater transparency in RTAs/ FTAs to facilitate public understanding of the scope and effect of these agreements.

We agreed to launch the Santiago Initiative for Expanded Trade in APEC to complement the achievement of free and open trade in the region. An overarching dimension of the Initiative is capacity building so that all economies can implement and benefit from their work on trade liberalization and facilitation.

The Initiative has two components:

ABAC presented us two relevant proposals: a joint scoping study for a Trans-Pacific Business Agenda; and a study of the feasibility and potential scope and features of a Free Trade Area of the Asia-Pacific.

We welcomed the inputs from our business community, including ABAC's resolve for expanding trade, and we share its view on the critical importance of trade facilitation. We look forward to the continued participation of ABAC as we implement the Santiago Initiative. In particular, we invited ABAC to provide its views on emerging trade facilitation issues as well as on the benefits and challenges that arise for business from the increasing number of RTAs/FTAs in the region and ways that these can be addressed.

We recalled the heinous acts and terrible consequences of terrorism as tragically manifested in Beslan and Jakarta during this past year. We reaffirmed our determination to advance the prosperity and sustainable growth of our economies and the complementary mission of ensuring the security of our people.

We encouraged relevant APEC economies to take measurable steps towards the ratification and implementation of, or the commitment to ratify, all basic universal antiterrorist conventions, so as to demonstrate APEC's unmistakable resolve to collectively confront the threat of terrorism and its disastrous effects on the people and also the economies of the region. In this context, we agreed to take steps to cut off terrorists' access to the international financial system, including implementing standards and agreements on combating terrorist financing and money laundering.

We commended the additional APEC work this year to help enhance the security of our people. We also commended the success of the APEC process and informal consultations in building consensus on these issues. We welcomed the further consensus arrived at by Ministers, and agreed to take the appropriate individual and joint actions to follow up on this consensus, in line with our respective circumstances. We welcomed the following actions adopted by APEC economies this year:

We expect to review progress on our commitments to dismantle trans-national terrorist groups, eliminate the danger posed by proliferation of weapons of mass destruction, their delivery systems and related items, and confront other direct threats to the security of our region in the future.

We endorsed the initiative on Fighting against AIDS in APEC, and pledged our political commitment to work together, at the regional and global levels, to combat the further spread of the AIDS pandemic. We support efforts to increase access to health care and safe and affordable drugs for all people living with AIDS.

We encouraged new efforts during 2005 by APEC to address the specific threats posed by infectious diseases such as Severe Acute Respiratory Syndrome (SARS), avian flu, pandemic influenza, tuberculosis, malaria and polio in the Asia Pacific Region and to strengthen the research into and production of relevant vaccines. We also welcomed and endorsed the strategic plan to promote life sciences innovation in the region to improve the health and well-being of our people.

As a response to global concerns about high oil prices, and in keeping with our commitment to promote energy security, sustainable development and common prosperity within the APEC region, we instructed Energy Ministers to continue to implement and enhance the APEC Energy Security Initiative.

Corruption is a serious threat to good governance and deters investment. Therefore, fighting corruption is essential to the development of our economies for the benefit of our people. We welcomed the timely commitments and recommendations of ABAC in this regard.

Reaffirming our political commitment to promote structural reform, and recognizing its value for achieving sustainable economic growth, including through improving the functioning of markets, we adopted the Leaders' Agenda to Implement Structural Reform (LAISR).

We underscored the need to deepen capacity building initiatives in the region through private/public partnerships and increased interaction with international financial institutions.

We welcomed APEC's efforts in the field of education, in particular work undertaken to promote the use of English and other languages as tools for small and medium enterprises, and the use of information technology tools to assist the learning process.
We called upon our officials to advance toward an APEC Sustainable Development Framework, that will build on the work being carried out by APEC and ensure that the growth and development of the region is enjoyed by future generations. We instructed them to report on progress by the time we meet in 2005.

We welcomed Ministers' report on the progress made this year to strengthen APEC. We reaffirmed the need to continue to make APEC more efficient and responsive to all stakeholders.

We endorsed in full the Joint Statement agreed by Ministers at the 16th APEC Ministerial Meeting.